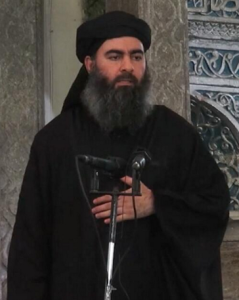 Mission accomplished, George Bush!  You succeeded in making Saddam Hussein look like Mahatma Gandhi compared to Abu Bakr al-Baghdadi of the ISIS Caliphate.   Your invention of non-existent weapons of mass destruction (WMD) back in 2002 as an excuse to invade the sovereign state of Iraq in 2003 has come back to bite us in the ass big time. ISIS, the new Golem of Iraq and Syria, has filled the vacuum of power left in the wake of your propping up of the incompetent Shia kleptocracy we support in Iraq.  (Let’s give an assist here to Barack Obama as well, who vacillates between leaving Iraq and getting back in, even as he tells us to look forward, not backward.)

Saddam Hussein may have ruled with an iron fist, tortured, and used our supplied nerve gas but he did rule a secular state in which Shia and Sunni Muslims lived relatively peacefully together.  He even tolerated a Christian community. His people received a decent education and adequate health care while he and his sons spent time building massive villas around the country.

That regime now looks benign compared to the murderous rule of the expanding caliphate of ISIS engulfing not only Iraq but the catastrophe of Syria. Obama, of course, has learned nothing from Bush’s disastrous military adventurism in the Middle East and has slowly been escalating our involvement again in Iraq 3.0.

Mark my words: This isn’t going to turn out pretty!