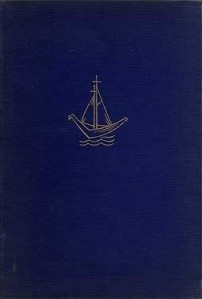 First Edition of The Death Ship, by B. Traven

B. Traven wrote the best selling book, The Death Ship, when people still read serious books.  Traven was a pseudonym for the author who never revealed where he lived or his real name to his publishers.  It was for good reason.  He had been condemned to death in Germany by the Social Democratic government which was then in power in the early 1920s.

b. traven (sponsor of this blog) read The Death Ship in about 1946 after being demobilized from our wartime army.  The story line of the book and the mystery surrounding Traven struck a deep chord in him at the time.  The economic rootlessness of the Great Depression before the war and the anarchic destruction and dislocation of the war in his life made The Death Ship and Traven an analogy to that life.

Traven’s second book was the iconic story of greed, The Treasure of the Sierra Madre, so effectively put into a film by the director John Huston.  The character Fred C. Dobbs, in the film played by Humphrey Bogart, voiced Traven’s deep seated feeling of the world we live in when he says, I know what gold does to men’s souls.

In later years, Traven wrote a number of books chronicling the exploitation of the  native Indian population in Chiapis, Mexico.  His books were honored in postwar Germany but they did not know he was Ret Marut, the condemned editor of the Spartacist newspaper. (He was condemned by the Social Democratic government after they cut a deal with Prussian militarists under Paul von Hindenburg.)  Despite their “liberal” reputation, the Social Democrats agreed to eliminate the leftist Spartacist leadership.  Reactionary forces such as the Freikorps were given free rein to murder Spartacist party leaders, Rosa Luxemburg and Karl Leibknecht, and to terminate other party members, including Marut (Traven).

The name of B. Traven defines our blog as Contrarian.  Skepticism, not nationalism, gives life to any true Democracy.

P.S. For those of you who wish to learn more about that period in German history that preceded and contributed to the rise of corporate fascism, seek out Alfred Doblin’s fascinating and highly readable trilogy* and see for yourself if there are parallels between Germany in the 1920s and early 1930s and today’s authoritarian America.

* out of print but available in used copies; to me, the last volume of the trilogy, “The Betrayal,” speaks the most to our situation today.