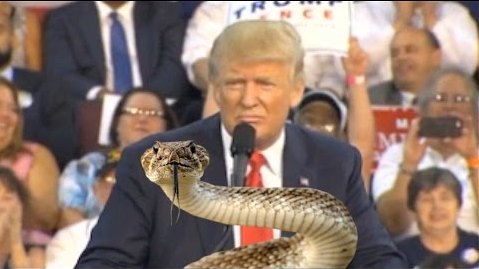 The author of the piece is a 30 year veteran of jazz radio broadcasting in New England. He’s also a long-time Contrary Perspective reader and active commenter.  We encourage other readers to submit their ideas to the blog. – Ed.

In what is unquestionably, in this writer’s mind, already the most bizarre presidency of the United States ever, a surpassingly bizarre detail is Donald Trump’s obsession with “The Snake.”  This is a song written by Oscar Brown, Jr. (1926-2005) and recorded for his second Columbia Records LP, “Oscar Brown, Jr. Tells It Like It Is,” released in 1963.

Trump started reciting Mr. Brown’s lyrics on the campaign trail in 2016, giving no credit whatsoever to their author and no clue to the original context. He repeated this act in front of the crowd attending the Conservative Political Action Committee (CPAC) convention in the nation’s capital the weekend of February 24-25, 2018. This brought new media attention to the controversy surrounding the president’s perverse misuse of the song.

“The Snake” is one of many songs Mr. Brown wrote and recorded on the subject of what used to be called “the war between the sexes.”  Walking to work one day, a “tender-hearted” woman spots a snake half frozen in the cold. She takes him home, parks him in a warm corner and nurses him back to life “with some honey and some milk.” But “instead of saying ‘Thanks,’ the snake gave her a vicious bite.”

“Why?” asks the poor woman as her life ebbs away. The snake’s hissed reply: “You knew durned well I was a snake before you took me in!” And that’s really all there is to it, with its quasi-sexual imagery and hint of what allegedly transpired in the Garden of Eden. (“Wimmen’s Ways” is a spoken-word segment of Brown’s musical play, “JOY!” [original cast recording issued on RCA Records, 1970, never reissued on CD] in which Eve discovers that the way to control the physically stronger Adam is to install a lock on the bedroom door!)

In President Trump’s recitation of “The Snake,” he suggests the snake symbolizes undocumented immigrants who turn to violent crime. His focus on the very small percentage of such immigrants who turn to criminal activity while totally ignoring the hard-working, underpaid people who manicure the lawns of the well-heeled, cook their meals and look after their children is perhaps the vilest aspect of this man’s public-political persona. Not a day goes by that he doesn’t spout or tweet something that is utterly, demonstrably false. This nation’s reputation sinks lower daily in the eyes of the rest of the world.

The New York Times opinion columnist Maureen Dowd, the weekend of CPAC, wrote what one might call an extended variation on the lyrics, in rhyme, expanding them into a turning of the tables on Trump. She incorporated essentially all of Oscar’s original lyrics, but, just like the president, she failed utterly to give credit to the song’s author.  The Washington Post followed up with an article setting the story straight, albeit with a factual error about one of Mr. Brown’s musical stage plays.

The Most Under-Appreciated American Performer

I have deemed Mr. Brown, over the decades of my jazz radio broadcasting career, the single most under-appreciated American performer of the second half of the 20th Century, and played his recordings frequently.  I became aware of him while still in high school, thanks to Steve Allen having presented him on his late-night TV show in the 1960s.

Already concerned at that age with this nation’s social injustices, I was won over to Oscar even before I came to have a wider appreciation for the realm of jazz music. His musical pleas against bigotry and violence were powerful, but above all he addressed the human condition. (Listen to “The Tree and Me” on the same album as “The Snake.”) Mr. Brown had a fine singing voice, and really got into the characters he presented in his songs. If someone was drunk (“kind of woozy”), you could hear it in the vocal characterization.

While Columbia Records was achieving great success at this same time with a young fellow from Minnesota calling himself Dylan, the prestigious company showed Oscar Brown, Jr. the exit door after four albums. His work was simply too serious, though he also possessed a wicked sense of humor, to make him a best-selling musical artist. Songs about surfing, hot rods and teenage angst sold, not (with rare exceptions) social commentary.

Donald Trump has never revealed how the lyrics to “The Snake” came to his attention. It is inconceivable that such a bigot would be familiar with the work of Oscar Brown, Jr. (who is neglected even within jazz circles in my observation) or in the least sympathetic to the latter’s political views.

Needless to say, were Oscar still alive, the feeling would be more than mutual. Mr. Brown’s heirs have asked the president to cease and desist, to no avail.    Incidentally, the WaPo article is correct in stating that Oscar was a member of the Communist Party USA in the 1950s.  They too nudged him to the exit door, deeming him a “Black Nationalist.

Mr. Brown confirmed these details for me when I had the honor of recording a face-to-face audio interview with him in 1992. Despite the details of Oscar’s background, Trump has no problem twisting “The Snake” into hateful rhetoric. I would argue this is because his unfettered ego informs him that he really is above all norms of human decency in his public statements and personal conduct. Truth is a continent very foreign to this man.

A documentary film–”Music is My Mistress, Politics My Life”–about Oscar Brown, Jr. exists and may be available via outlets like eBay.  His audio recordings are available on Amazon.

5 thoughts on ““The Snake:” Donald Trump Tells it Like it Isn’t”