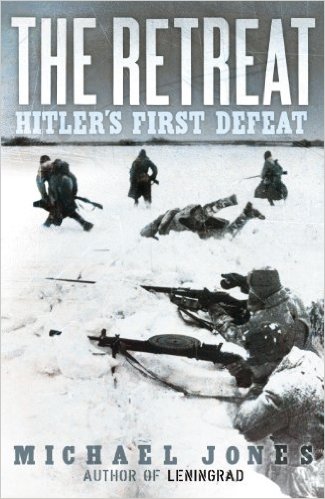 Been buying lots of books recently from Half-Price Books’ dollar bin.  A fair percentage of them are new books that were publisher’s returns at some time in their life, books that were marketed but never sold.  Good percentage of these are books originally from the UK. Books judging from their blurbs that were successes on the other side of the ditch but never made a splash in either the dollar or critical marketplace here.  Hence my buying an unread new copy of The Retreat:  Hitler’s First Defeat, by Michael Jones,  for a dollar last month.

Jones is a professor in the UK, specializing in military studies—hardly any of those over here, nor military studies departments either—and this is his third book, of four, on World War II on the Eastern Front (Nazi Germany versus the Soviet Union).  I’ll be checking his others out sometime after reading this one.

World War II is the most written-about event in human history and it is unlikely that will ever change.   For starters, it is hard to imagine there would ever be enough survivors from a postwar World War III to read any books about it.  It is quite understandable and not anything inherently bad that the biggest war in human history has gotten that most historical attention, or war in general gets so much attention.  On my end of things I’ve always explained my interest in reading and learning about war with the quote from the French film director Godard, who was asked why he made so many crime movies.  Godard explained that he liked dealing with the big emotions in his movies, and crime had them all.

Same is certainly true about war.  No shortage of human drama and folly in any decent account of it.  There is no shortage of real history—factual narrative, political struggles to explain, critical analysis of events and players, technical and sociological explanation—to be written about war, and the big emotions mixed in makes it more interesting reading than most other history.

I’ve maintained for a long time that everyone ought to read at least one book on the Eastern Front to understand 20th Century history.   The facts are that the Soviet army destroyed the Wehrmacht and that was most of World War II.  The statistic that irrefutably explains this are the numbers of division combat-days the Wehrmacht had on each front during the war.  3/4ths of all Wehrmacht division combat-days in the entire war took place on the Eastern Front.  The rest of the European war for all six years of it combined on all fronts was the remaining 1/4th.

Americans have never been wise to this fact and we ought to be.  For starters, it should show us that our contribution to the allied victory wasn’t that big and perhaps our military capabilities were then and remain now overstated.   We the US didn’t win the war, we didn’t save western civilization from the Nazi plague, the Soviets and their army did.  And they paid a terrible price in blood and material destruction in doing so.  We’ve never acknowledged that; the Russians will never forget it.

Jones’ book is my new book of choice for the general reader about WW II on the Eastern Front.  It doesn’t cover the entire war on the Eastern Front, but it does an excellent job, perhaps the best I’ve read, of explaining the most important campaign in it, the German effort and failure to capture Moscow in 1941.  The Germans failed at taking Moscow, and the subsequent Soviet counter-attack was the first major Allied victory over the Wehrmacht in the war.

This in turn was followed by the remarkably successful German Model counter-counter-attack, which resulted/meant that the Germans would not run out of Russia like Napoleon—they could have been had things gone a little bit differently, as badly unprepared as the Wehrmacht was for the Russian campaign and weather.  This meant that the Germans were stuck with a very long and difficult war.  The course of the war all followed from this chain of events in the fall and winter of 1941/2.

All of the rest of the war can be seen in that campaign—diminishing Wehrmacht skill and materiel advantages versus that of the Red Army, horrible cruelties inflicted on the civilian population by both armies in their scorched earth policies, immense loss of life on the vast battlefields, heinous crimes regularly and routinely committed by the Wehrmacht  against Soviet soldiers, prisoners of war, and civilians, and lots of hard, hard fighting that because of Soviet manpower and industrial superiority, could only end with an eventual Soviet victory, at a terrible price.

Jones has an excellent grasp of the material.  He has culled lots of revealing first-hand stories from recent German and Russian written accounts, and has himself done some excellent interview work with surviving participants.   Jones keeps the narrative of the battle coherent to the general reader, which is something that much of military writing, with its repetitive and mostly incoherent details of unit X moving to position Y defeating enemy unit Z in the process, fails at.

He rightly emphasizes the vile Nazi crime of their deliberate murder of over 2 million Soviet POWs through starvation and neglect in POW camps, in the first year of the war.  This crime has never gotten the attention it deserves in the West, and the German nation has never acknowledged it as they have with the Holocaust.

Jones steers clear of “what if” history, i.e. whether the Germans could have defeated the Red Army had they done things differently.  That this question is still debated shows the continued failure of Western writers to understand that the German war objective was extermination or enslavement of the USSR’s inhabitants and any question of the Germans doing things differently is an idiotic impossibility.  (Its persistence may also indicate closet Nazi sympathies in more people here than we care to acknowledge.)

The fact is that the German army never was large enough, nor equipped well enough, nor supplied sufficiently, to put enough men and equipment in the battlefields of the Eastern Front to win.*   The German failure in front of Moscow at the end of 1941 was most of all a failure of logistics and overstretched and overworked troops and equipment in a campaign that was far bigger and ran far longer than expected.

The Soviet army never broke, and Stalin and his regime never lost their will.  That part of it was, as Wellington said, a damned close-run thing. But it was the only way the German nation could defeat the USSR, and the German decision to launch a war based on this victory coming from an internal Soviet collapse in the face of a German attack is irrefutable proof of the criminal madness of Hitler, his Nazi apparatchiks, and the German senior general staff.

*I recall reading that the Wehrmacht general staff, on orders from Hitler, did a staff study about Germany invading the Soviet Union immediately after the France campaign of 1940.  The staff underestimated the size of the Russian army by 50%, a colossal mistake that itself was enough to ensure a German defeat.  But even with that flub, the conclusion the staff reached was that Germany did not have the logistical capability—enough trains, horses, trucks—to supply enough soldiers over the distances required to defeat the Soviet army.  The calculations involved were straightforward enough and irrefutable.

Nevertheless, the senior Wehrmacht generals, when presented with it, ignored it because they read the political winds correctly and saw that Hitler had his heart set on invading Russia and their own desire for fame and glory, combined with their intellectual, professional, and moral cowardice, had them ignore the report and sign off on Barbarossa (the German invasion of the Soviet Union in June 1941).  If there is a more contemptible action ever than this by senior military leaders I don’t know of it.  Except maybe for the US Joint Chiefs of Staff signing off on invading Iraq in 2003.