The business of wars and weapons sales is booming, with the United States leading the pack as the world’s foremost “merchant of death,” as Michael Klare notes in this article on the global arms trade for TomDispatch.com.

But why should we be surprised?  War has always been a racket.  And if you don’t believe me that forever war is forever profitable – for some, I recommend that you read War Is A Racket (1935), a classic polemic written by U.S. Marine Corps General Smedley D. Butler.  Twice awarded the Medal of Honor, Major General Butler turned against military adventurism in the 1930s as he saw how his efforts and those of his men were exploited by elites to expand corporate wealth and power, even as they exempted themselves from the hardships and dangers of combat. 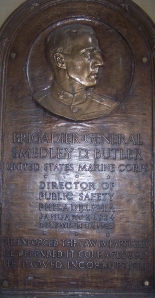 Plaque in Philly in Honor of Smedley Butler. Photo by author.

As Butler put it in War Is A Racket:

Not many.  Butler knew who really paid war’s high bills:

“Yes, the soldier pays the greater part of the bill.  His family pays too.  They pay it in the same heart-break that he does.  As he suffers, they suffer.  At nights, as he lay in the trenches and watched shrapnel burst about him, they lay home in their beds and tossed sleeplessly … And even now the families of the wounded men and of the mentally broken and those who never were able to readjust themselves are still suffering and still paying.”

And Butler knew how best to put an end to the racket of war.  He was blunt – and right:

“We must take the profit out of war.”

“We must permit the youth of the land who would bear arms to decide whether or not there should be war.”

“We must limit our military forces to home defense purposes.”

Tragically, since the end of World War II Butler’s sage advice has been completely ignored.  War is more profitable now than ever.  We permit our youth to have no say in whether there should be a war.  (Congress hasn’t issued a formal declaration of war since 1941.)  And today as a country we equate “home defense” with the world’s strongest military, configured for global reach, global power, boasting of “full-spectrum dominance.”

Unless we heed Butler’s advice, debilitating wars will continue.  They will continue because perpetual war is simply too profitable.  In the racket of war, the chief racketeers are easy to identify.  As Butler knew, just follow the money.