“Never believe anything that you read — and only half of what you see.”  My father taught me that saying, an expression of healthy skepticism that is much needed when reading and watching today’s media productions.  Watchdog journalism has been replaced by lapdog journalism as our media “elites” cater to those in power.  In today’s column, Don Rose highlights how CNN recently hopped into the lap of Rahm Emanuel, wagging its tail and panting all the way.  His article is a timely reminder of the wisdom of my dad’s saying.  W.J. Astore

“The Star that He Is”: CNN’s Shame and Other Matters

A couple of weeks ago I commented on the first six episodes of CNN’s eight-part documentary “Chicagoland,” noting it was grossly imbalanced about this city—but so amazingly kind to Mayor Rahm Emanuel he could have used his segments as campaign commercials. 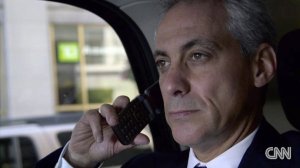 As we used to say, even Ray Charles could see that the Emanuel clips were clear set-ups showing him heroically solving the city’s problems, talking bold programs, being kind to children, glibly answering the few critics who were given any serious time and all but rising to the heavens from the rooftop of City Hall as Muhammad was said to have done from the mosque in Jerusalem.

Sure enough, an enterprising Chicago Tribune reporter got hold of scores of e-mails between the producer-directors and City Hall seeking access to the mayor—a common practice for legitimate documentarians. But these promised in return not only to treat the mayor well but also to show him “for the star that he is.”

Now how could Emanuel refuse such an offer? Understandably every politician tries to control access and attempt to get good set-ups, so you can’t blame him. The shame goes to the folk who made and followed through on the offer.

There was something suspect from the git-go of course because both the producer-directors as well as top producer Robert Redford have had relationships with Emanuel’s brother Ari, who runs perhaps the most powerful talent/booking agency in Hollywood.  Such agencies have replaced the old studios as the most important entities in the entertainment industry.

Although everyone swore up and down that Ari’s agency was not involved in this production, it was irrelevant whether he was involved or not. Anyone who ever wants to have lunch again in Hollywood would do nothing to offend the head of such an agency and do everything possible to please him because tomorrow you are certain to need a good relationship with him. That’s the way of the world and CNN seemed more than pleased to go along—independent journalism be damned.

Which brings me to another question about what’s going on in our town’s journalism. The Sun-Times, which often reprints this column, has gathered up all its print and online political coverage under the rubric “Early and Often,” which is “sponsored” by a well-known Democratic political public relations firm, Jasculca-Terman, whose name at times is more visible than the newspaper’s.

The deal seems to be simply advertiser-publication, but several people have questioned whether the PR firm exercises any editorial control. There is no evidence of such, but the relationship makes the question logical.

Furthermore it raises the question of how the paper might treat other clientele of this heavy advertiser.  It seems an uncomfortably cozy financial relationship between a publication and a firm whose business is getting clients into the paper and having them well treated.

Again, these are simply questions, not accusations. It fundamentally suggests a softening of the once iron wall between the advertising and editorial sides of a paper that unfortunately is having circulation problems.

A long-time political strategist (now retired), Don Rose is part of the conscience of Chicago and (we’re honored to say) an occasional contributor to The Contrary Perspective.

9 thoughts on ““The Star that He Is”: CNN’s Shame and Other Matters”