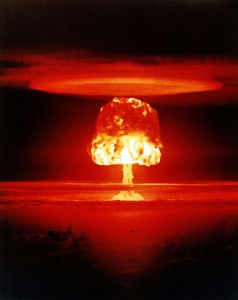 Isn’t this a sin?  Shouldn’t it be condemned as such?

Thanks to my Irish heritage, I have my fair share of the melancholy of the bogs.  It’s true we Irish joke a lot, but that doesn’t mean we’re optimistic.   Our best jokes are invariably ironic—e.g. when a priest becomes a bishop, he’s never thereafter served a bad meal or told the truth—and so the Irish by and large avoid being disappointed, until, that is, they get rich enough to become Republicans and have something to lose.  Thus I’ve held back from joining in the general enthusiasm for Pope Francis.

An English friend, a theologian—a theologian whose theological insights are all the keener for having a wife and two adorable little girls—has been asking me when I was going to warm up to the pope, and I’ve always answered I’d do so when he started to have something to say about nuclear weapons.

So it was that when I read in the Jesuit magazine America’s online edition about the pope’s letter to the Vienna Conference on the Humanitarian Impact of Nuclear Weapons in December in which he said, “Nuclear deterrence and the threat of mutually assured destruction cannot be the basis for an ethics of fraternity and peaceful coexistence among peoples and states,” I did begin to warm up a bit towards Francis despite the obvious question of why he didn’t come to Vienna himself instead of leaving it to Archbishop Tomasi.

The next day, moreover, when I re-read the America account, I realized that I had been indulging in wishful thinking.  Yes the pope, as well as Archbishop Tomasi at the press conference that followed, were indeed talking about nuclear weapons, but they were talking about them in the same old unassertive way.  Yes, Tomasi suggested that nuclear deterrence was no longer acceptable, but he didn’t, as he couldn’t, come right out and condemn it as the American bishops’ 1983 peace pastoral The Challenge of Peace came close to doing but finally fell short of doing, thanks to pressure from John Paul II and the “NATO bishops,” especially Archbishop Hoffer of Berlin.

It’s also noteworthy, though not at all surprising, that neither the Guardian nor the New York Times had a word to say about either the pope’s statement or the Vienna Conference itself. (As they would have if he had said that all good dogs and pussycats go to heaven.)  Nor did the print edition of America, for that matter, carry its online account of the pope’s letter to the Vienna Conference.  The end of civilization as we know it—no more Super Bowls, no more March Madness, no more “Downton Abbey,” no more Red Carpets, no more American snipers, no more views of Kim Kardashian’s gluteus maximus—is a fearsome specter too unnerving to contemplate.  And the media, whether secular or religious, have chosen not to do so.

If Francis is really serious, he has to speak up or shut up.  Only a straightforward and unequivocal condemnation of nuclear deterrence can get the world’s attention.

Catholic theologians agree—though not too loudly—that the actual launching of a single ICBM (each of which is many times more powerful than Little Boy and Fat Man, which destroyed Hiroshima and Nagasaki, the latter the historical center of Japanese Christianity) would constitute mass murder, a most grievous sin indeed.  But for nuclear deterrence to be effective (presuming for the sake of argument that it can be) there has be the unwavering intention to launch on command, which would, of course, be a sin.   But if you intend to sin—according to Catholic moral theology, not to mention Jesus Christ—you have already sinned.  And this goes not just for the Catholic missileer at his console deep beneath the Great Plains but for the Catholic hierarchy who seem to be too patriotic to convey this simple truth to Catholics.

That the morale of the officers in Strategic Command (STRATCOM) itself is abysmally low is notoriously evident, as testified by recent events (especially the General who got so drunk at a nuclear security conference in Moscow that he shocked even his Russian hosts). And is it any wonder why?  The general and his fellow officers (who know a hell of a lot more about the peril posed by nuclear deterrence than the pope and the College of Cardinals) are in effect, though they might put  it differently, living in sin, and they know it even if the theologians are silent and prelates persist in their affective ignorance.

Finally, what perhaps saddened me the most in the pope’s Vienna statement from the conference was the platitudinous boilerplate that marked his conclusion:

I am convinced that the desire for peace and fraternity planted deep in the human heart will bear fruit in concrete ways to ensure that nuclear weapons are banned once and for all, to the benefit of our common home.

I don’t see how Francis can be so optimistic, a man who witnessed man’s inhumanity to man up close during Argentina’s Dirty War.  In any event, I don’t share his optimism, and like my friend the English theologian, I too have children—as well as grandchildren.

Michael Gallagher, a coeval of Sr. Megan and a former Jesuit seminarian, served as a paratrooper during the Korean War.  His book on Catholic activists, The Laws of Heaven, won the National Jesuit Book Award in theology in 1992, and his translation of Yukio Mishima’s Spring Snow was a finalist for the National Book Award in translation in 1972.

2 thoughts on “The Silence of the Shepherds: Living In Sin with Nuclear Weapons”