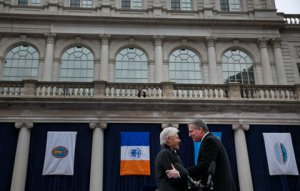 De Blasio and Clinton: Change We Can’t Believe In

I am not a New Yorker but I do like that city. I have lived, at one time or another, in all three of the great cities in our country, New York, Chicago, and San Francisco. Each has its virtues and its downsides and all now seem to be in the hands of neo-liberal mayors who make fabulous populist promises to get the 99% to vote for them, only to come up very short in execution once they gain office.

There’s a breed of Democratic politicians today who seem to have learned from Bill Clinton and Barack Obama that high flown “progressive” campaign promises to convince the 99% to vote for them are only that – vapid promises.  Such promises are like flypaper to snare votes of gullible schmucks. The politicians and their handlers just renew the flypaper periodically with feel-good rhetoric even as they embrace the 1% agenda of rampant development at the expense of the poor, school policies that rob the neediest sectors of a good education, and fiscal policies that advance the privileges of the city’s wealthiest.

It is hard for me to believe that tough-minded New York liberals are gullible enough to believe that their overwhelming endorsement of Bill de Blasio for Mayor has brought anything other than more Obama-like rhetoric.  As usual, it’s all talk and no action.  No action for the poor and under-privileged, that is.  Plenty of action for the rich and well-connected.

After the recent fierce fight in the courts, led by the Center for Constitutional Rights, to bring under control the oppressive “stop and frisk” campaign of the New York Police Department, de Blasio’s  first official appointment as Mayor was Bill Bratton, the former NYPD chief and a supporter of race-based police tactics such as stop and frisk. Next came school policy. After the Obama administration’s Education Secretary, Arne Duncan, noted for shifting funds from public to so called charter schools, opposed de Blasio’s first reform selection for school administrator, the newly minted mayor caved and appointed a 70-year-old caretaker to the job. Then to seal the deal as a fully functioning neo-liberal, he had Bill and Hillary Clinton officiate at his inauguration.

Mayor of the people?  Hardly.  Change you can believe in?  Doubtful.

New York citizens threw out a 1% Mayor Bloomberg only to elect Bill de Blasio, a man who talks about a New York for the 99% even as his initial decisions favor the status quo.  He clasps Bloomberg to his chest even as Obama clasped George W. Bush to his.  It’s yet another case of “meet the new boss … same as the old boss.”

New Yorkers, after six years of waiting in vain for Obama to deliver, are you going to listen to the same siren song from de Blasio?

3 thoughts on ““Change We Can Believe In?” For New Yorkers, It’s Déjà vu All Over Again”