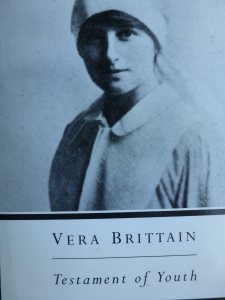 Testament of Youth, based on Vera Brittain’s autobiography of the same title, was showing at the arthouse multiplex where I decided to spend the day in the HVAC out of the allergens.  For all my complaints about Austin, at least it is a large enough market to have such a movie theater.  I’d hate to be living in some place that didn’t, and that’s unfortunately way too much of this country.

The movie irritated some the Merchant-Ivory saddlesore I’ve got, as I’ve been tired of the M-I period pieces for some time.  Stilted period piece drawing-room dramas about the problems of the British rich a century ago can all go hang, and so can the rich while we’re at it.  This movie, although afflicted with many of the Merchant-Ivory cinematic diseases, was watchable due to the strength of the underlying material, as Vera Brittain’s memoirs are pretty good and quite truthful.  That, and her story of how all of her male friends and relations, every last one of them, one right after the other, went off to the Great War (1914-18) and got killed is stronger and more realistic medicine than Merchant-Ivory ever serves their audiences.  It does not leave you with the usual Hollywood post-movie happy uplifting feeling, this medicine.

The best part of the movie is a scene at the end, where Vera Brittain herself comes back from the war, where she’d served as a casualty clearing station nurse, dealing with the most seriously wounded soldiers coming in muddy and bleeding to the first-line hospitals from the front.  She wanders into a postwar debate at Oxford about the necessity of German war reparations, pro and con.  Vera climbs onstage and gives a very good speech about the futility and horrors of war, and how the average German was no different than the average Briton, and how both were sucked into a war that neither wanted that yielded nothing but death and destruction.  She had the great insight and strength of character to point out how guilty women themselves were in this transpiring, as they gave their assent, and their sons and husbands, to the war, instead of fighting it and fighting for their men’s lives by fighting the war at home.  Something quite terribly true in that, something we all overlook or ignore.

Vera Brittain became a peace activist after the war; from quick web research I can’t say if she was disappointed at how the 20th Century turned out to be an endless run of wars across most the globe.  Certainly had a right to be if she was.   Not an uplifting and inspiring movie; everyone dies and the heroine’s lifelong career seems by events to have been rather hopeless.  More discouraging thoughts for the drive home here.

Worse comes from the other storyline to the movie, how Ms. Brittain struggled to become a scholar and intellectual/academic/author via studying at Oxford, at a time when it just wasn’t done, period, by women.  She managed to do this all after the war, and Vera Brittain is regarded, rightly, as a pioneering feminist for her struggles in this direction, ones that allowed more women to lead more fulfilling and productive lives, for their and society’s benefit both.

While this is an uplifting and feel-good moment from the movie, my own take on it is colored by the knowledge of an impending Hillary Clinton presidency.  There is something quite terribly wrong that the feminist movement, and that the struggles of women like Vera Brittain has yielded a despicable warmonger like Ms. Clinton as this country’s first female presidential candidate and likely president.  Ms. Clinton has gladly presided over and abetted 13 straight years of war, a record time of war for this country and a time that continues with no sign of ending.

The great aggravation beyond this is that the core of Ms. Clinton’s supporters is apt to be watching this movie and enjoying it.  The demographics of the art-house movie chains are older, white, upper-middle-class, college-educated, and somewhat more liberal politically than average.  The female half of that demographic is the core of Hillary Clinton’s political support in voterland, and I’d bet any sum you care to name that the vast majority of that demographic in the movie audience that day was ready for Hillary.

I’m not curious about what sort of excuses they have for ignoring for more than a decade now our endless lost wars driven by the support, abetment, and connivance of Ms. Clinton, and I really don’t care how they manage to ignore and/or explain away this movie’s direct message, Vera Brittain’s great true message, about the horrors and futility of war, and the responsibility of women for it and their responsibility to do something to stop it.

I’m tired of them and their lameness and their fundamental uselessness and I don’t care a lick about them anymore.   I’m not ready for Hillary but I am ready with cause to dismiss both her and this class of her supporters all as useless fuckwit good-for-nothings.  I’m fed up with the wars and all the lies and liars behind them and there’s something very wrong with us that more people aren’t.

Einstein was once asked by a reporter who the most important people for a better future would be.  He thought for a second, and replied that artists were.  The reporter was surprised by this answer, and asked why?  Einstein replied that artists could imagine new things for a new better world.  No better words ever about art than these.  Our decade and a half of pointless futile wars, wars we started that have cost millions of lives of  persons abroad who have done us no injury, have shown profound failures of every major institution in this country.

The military has consciously signed off on the same strategic and operational stupidities they committed in Vietnam, the intelligentsia is either silent or whored-out to the war party, and the moral and religious leadership of this country seems to have quite evaporated away as there isn’t the slightest sign of them out and about anywhere.  One would hope that artists would step up and show us the right path but they haven’t either, dammit.

Cinema is America’s great contribution to the arts, and it hasn’t done much for us in the face of our embrace of pointless endless war abroad.  Have to give the authors of this movie much credit for trying.  They did a manful job of getting the necessary true message about war out in their movie, in a Hollywood climate that actively discourages it.  The final discouragement that comes to you from watching this movie is knowing that their fine efforts have failed to enter into the minds of Americans, of female war/Hillary supporters, and failing at giving them the light to see better, to understand better, to act differently and better, about the vile endless war our country embraces.  Keep trying, boys, OK?

8 thoughts on “Testament of Youth: A Movie that Hurts for All the Wrong Reasons”