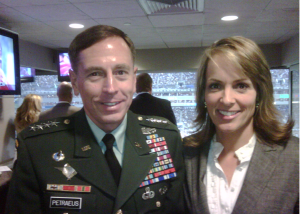 Petraeus putting on a show for Broadwell

Former CIA Director and Army four-star general David Petraeus is not very good at keeping secrets. He shared multiple binders full of top-secret materials with a journalist – and was found out. And he bedded that journalist, the attractive Paula Broadwell, but was unable to keep his infidelity secret either from his wife or the government.

In spite of committing a treasonable offense while directly responsible for the largest spy apparatus in the world, and in spite of the mind-boggling amateurishness of “hiding” his intimate trysts with Paula in a Gmail account, Petraeus has essentially escaped any serious consequences for his acts. Though he has proven himself incapable of keeping government secrets or protecting his illicit lover, like gangster John Gotti, known to the tabloids as the Teflon Don, Petraeus has not only escaped serious prosecution, but has popped through the revolving door into a lucrative life in private enterprise.

What is his secret?

Recently, a slew of sensitive and embarrassing government secrets have been shared with journalists.  And, as with Petraeus’ acts, the breaches leading to these revelations have been front page news.  Chelsea Manning stepped directly into a firing line by sharing with Wikileaks what she found to be disturbing materials about a US occupation of Iraq run amuck.  John Kiriakou, a former CIA analyst way below the lofty pay grade enjoyed by Petraeus, similarly found that whistleblowing had some harsh consequences thanks to the selectively applied Espionage Act.

The best known leaker of the current era is Edward Snowden.  Snowden, a true believer in the American cause, and a dedicated geek for the US spy world, slowly became disenchanted with the disconnect between what he saw as his noble calling and the reality of massive and indiscriminate surveillance.  Rebuffed by superiors, he shared the secrets with a journalist, and was immediately hounded across the globe. He is now holed up in Russia, the most unlikely country on the planet to hand him over to Obama’s goons for rough treatment under the Espionage Act.

But Petraeus was never threatened with persecution under the Espionage Act, though the profile of his leaks is very similar to those of Kiriakou and Snowden.  The, mostly alternative, press coverage that has noted the inconsistencies in prosecution between Petraeus and the others has focused on vague “political connections” as having protected Petraeus.  In a recent article in Vice News, Liz Fields quotes Jesselyn Radack, billed as “a national security and human rights attorney who has represented numerous high-profile whistle blowers including Edward Snowden,” saying:

“People who are in power or are politically connected, like the past three CIA directors, don’t get prosecuted for leaking classified information…”

Perhaps connections play a role, but besides conjecture and conspiracy theories, there is not much evidence to support the allegation.  What is incontrovertible, however, is that Petraeus’ leaks were qualitatively different than Snowden’s.  Snowden shared information that he is convinced to this day belongs in the public domain: things that every citizen of the US should know.  Manning outed the awful videos of US helicopter pilots murdering journalists because she is sure that they were criminal acts that needed to be aired, and that those responsible should suffer the consequences of their crimes. Kiriakou shared information with a journalist that he was sure revealed criminal activity in the government.

Petraeus had no such lofty goals. He probably has no pangs of conscience what-so-ever about all the secrets, criminal or otherwise, hidden in the binders he handed over to the fair Broadwell.  If the secret stuff helped Paula write all-the-more glowingly about her favorite general, then, heck, what’s wrong with that? After all, he didn’t have any angst about crimes being committed under his command – he just wanted to get laid!

And that’s the genius of his real secret. If he had looked honestly into the beast of the national security apparatus in which he played such a central role and felt his stomach churn as did Manning, Snowden, Kiriakou, and the dozens of other whistle blowers who have roasted on the open pit of the Obama administration’s “war on leaks,” then it really would not have mattered how connected Petraeus is. As J. Robert Oppenheimer, the father of the American atom bomb, found when pangs of conscience at what he had unleashed caused him to question the policies of the government he had so faithfully served, Petraeus would have been cast out of polite, politically connected, and financially secure society… and crushed.

Petraeus knew from the start that while he vaingloriously indulged in the power of leak-as-aphrodisiac (after all, what turns on a journalist more than an exclusive leak?), his actions, which did not question the flagrant abuses of power he oversaw in his role as CIA Director, would not incur the awesome retaliation of the US Government.

So who is the traitor, who the patriot?  Did Snowden, Manning, and Kiriakou commit treason, as prosecutors have fallen over themselves to prove?  And Petraeus, who showed such lamentable bad judgment, deserves to be treated as a staunch patriot?

These are clearly political rather than legal questions.  Snowden, Manning, Kiriakou, and many other whistle blowers acted out of true patriotism, fully cognizant of the dangers.  Petraeus, on the other hand, like a garden-variety spy selling secrets to the other side, had only his own well-being in mind.  His political connections may have helped, but it is the fact that he never challenged the lies and crimes hidden in his top-secret binders that makes him the Teflon General.

Stuart Lyle is a software executive and entrepreneur who has found success by focusing on people instead of technology.  As a contrarian, he always chooses public over private transportation… when he can’t cycle somewhere.

7 thoughts on “The Teflon General – Petraeus Finally Keeps a Secret”