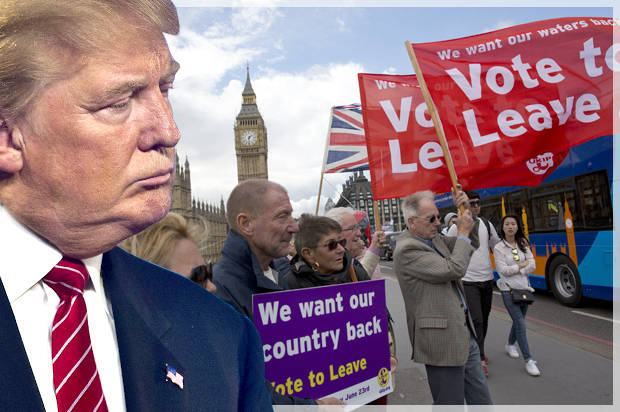 Alex Dunn is TCP’s European contributor.  His post explores the confusion in Europe wrought by the  election of Donald Trump.  Hopefully, Winston Churchill’s assessment of the US will turn out correct:  “You can count on Americans to do the right thing… after they have exhausted all other possibilities.” – Ed.

It is only a few months ago, back in the heady days of summer, when Europeans would chuckle that by the end of 2016, the United Kingdom could have chosen to leave the European Union and Donald Trump could be elected president of the USA.

Unlikely or particularly momentous election results are entertaining to ponder.  The more outrageous the perceived outcome of putting a polarizing candidate in the hot seat the better.

The media have made hay since Trump humbly put himself forward for public service and the (former) UK prime minister David Cameron made good on his election promise of a referendum on membership of the EU.

Anybody with column inches to fill could see that two electorates had been tossed a hand grenade each and were dared to pull the pins.

On either side of the Atlantic, the principal actors were more than capable of filling a news cycle with their bons mots;  Trump, a global name and Nigel Farage, the scourge of the European Union.

Whilst both Brexit and President Trump were two possible outcomes that the British and American electorate could deliver, it was never going to happen, was it?

In theory Britain could turn its back on the EU, a little over 40 years after fighting to be admitted to the club.

In theory the Americans could choose to reject an established politician and hand the nuclear football to a reality TV star, who has never held public office.

It is also theoretically possible that the EuroMillions lottery ticket that I bought this evening could make me rich beyond my wildest dreams.

Someone once told me that most people find it difficult to comprehend statistical likelihood. The numbers are beyond us, so in visualizing the chances of my numbers coming up, consider the following.

I am handed the telephone books for all of Germany and told to select a single number from any of the many volumes. My random choice of name and number is known only to me.  A pilot is then told to fly me anywhere he chooses in his helicopter and to land outside a house.

The odds of me knocking at the door of said house and the door being answered by the person that I chose from the telephone book, is about the same as winning EuroMillions.

So just because something could happen, does not mean that it will? Some things are just too unlikely.

The French once flirted with a major electoral upset by putting the extreme right wing Jean-Marie Le Pen on the ballot, up against Jacques Chirac back in 1982. For those of you unfamiliar with Monsieur Le Pen, knowing that he considered the Nazi gassing of Jews to be “just a detail in the history of World War II” and that the French national soccer team had too many black players, should give an indication of the man’s world view.

In the weeks before the general election, the French agonised over having an extreme right wing candidate on the ballot. There was a palpable embarrassment amongst many French at that time, that the world was seeing a very different France to the one which they wanted to project.

The election was a staggering victory for Chirac, who won 82% of the vote. The French seemed to be saying, “we have made our point here. Our protest vote to get this clown onto the ballot is enough, but we don’t actually want him as president – we are not crazy!”

It seems that many of today’s Europeans had the same feeling about Trump.  He was just a poster boy to shake up the establishment.  On this side of the Atlantic, we are aware of a disenchantment with the political elite living in the rarified bubble of Washington.  Trump is seen by some as a man who cuts to the chase and speaks to the common man.  Hilary is seen as a crook and a war monger by the same people.

America and indeed the world has heard what Trump is about over the past 18 months and it seems that the voters liked what they heard.

There remains a question that is going to be very difficult to answer definitively; do the Trump voters take him at his word, or do they merely like his unconstrained straight-talk?

Do they really believe he will build a wall along the US-Mexican border, or do they just appreciate a candidate talking about immigration in the terms that they believe the politically correct politicians never do?

Clearly this is important because if Trump fails to deliver on his promises, there could be many millions who’s literal interpretation of his sound bites are going to come back to bite him.

If he does try to deliver on his promises, it is difficult to fathom the depths that the world will sink to. In short, there is no good way for this to end.

The European media that I have seen has been predictable in their coverage of the election. The earnest liberal press have sent journalists to the rust belt and sought out the very best stereotypical red-necks they can find, to rant enthusiastically about how Hillary should not be president because; the woman’s place is in the home (it is still 2016 when I last checked), there are too many Mexican criminals / ISIS terrorists pouring over the border, and most poignantly, how Donald Trump understands the working man and is going to fix the economy.

It appears many of the poor white communities in the US have pinned their hopes on Donald Trump because they know him to be a rich business man.  They have seen the sky scrapers bearing his name.  This guy is successful, so if he can run a business, he can run a country right?

I have heard him described as a “self-made” man, which is as richly comic as his father was comically rich.

Clinton has been accused of shady business dealings.  But when a light was shone on Trump’s tax affairs, voters congratulated him on beating the system.

I would have preferred to see more interviews with Republicans who were not caricatures, but still representative of the body of people who calculated that Trump was a better bet than Clinton.

Where are these people, because from what European’s have been fed by our media is that a toxic brew of delusion and double standards is the reason for this reality.

The British are wryly commenting that at least this will take people’s minds off Brexit, the U.K.s pending departure from the EU. But, say it quietly, there are murmurings that even that momentous decision may be reversed.

The same cannot be said for the next US President. Come some chill January day in Washington, the world will tune in and stare wide eyed at the inauguration ceremony.

Europe – we raised an eyebrow at the election of Reagan, we sniggered at Schwarzenegger becoming a governor and we gasped at George W Bush.  There is nothing more to prove.

6 thoughts on “Europe and The Donald”