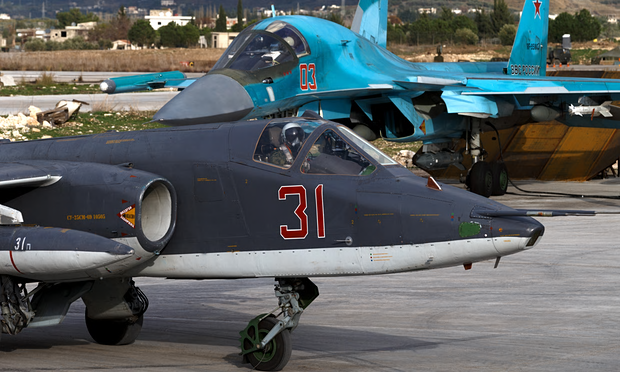 Russian SU-34 as provocation by Russia… or Turkey?

Istanbul (AFP) – Turkish President Recep Tayyip Erdogan on Friday expressed alarm over reports of a build-up of Russian troops in northern Syria near the Turkish border, saying such movements would not be tolerated.

The devil is at work in our fumbling interventions in Syria-Iraq. Why is the Turkish Sunni president Erdogan so upset about the Russian “troops” in northern Syria?  It is a very intricate backstory of American interventionists getting in way over their heads.  In their efforts to solve one problem, they are creating a far greater one, bringing us to the brink of disaster.

Why is the State Department and the US military leadership so amateurish when dealing with these middle eastern countries?  Whereas they have centuries of bargaining experience, we bring only hubris to the table. They outfox us every time. That is why Iraq now has a Shiite government and a country in shambles, all thanks to US intervention.

But that is an old story. The current story starts with what was framed as a clever deal.  President Erdogan agreed to base US strike aircraft in Turkish airbases in order to save a little fuel and afford more time over targets. We thought we were being very smart by asking him to participate in the air war against ISIS. He jumped at the deal.

But Erdogan, who is on his way to becoming the supreme ruler rather than the president of Turkey, is a sly fox and is closely aligned with Saudi Arabia’s Sunni rulers.

What we got out of the deal was not sustained attacks against ISIS, but air strikes against our allies, the Kurdish forces on his border, who are sworn enemies of the Turkish government. How could US negotiators fail to understand that Turkey has functioned as the facilitator in sending foreign fighters to join ISIS, arming them, and transshipping their oil output for years?  Why did they ignore that just a short time before the air basing deal Turkey precipitated yet-another a confrontation with the Kurds?

The net result is that Turkey is going balls out bombing our proven allies, the Kurds, while we are flying a handful of missions against ISIS virtually alone and the Saudis are bombing, with our support, the primitive Houthis in Yemen. (The Saudis tend to like defenseless enemies.)

It gets even more convoluted. Russia decides to get into the fray to buy some time for the Assad government because they are beginning to feel that ISIS will soon be on their border if some space does not open up for a peace deal to be made in Syria. Within a month or so of the Russian intervention they have flown almost as many anti-rebel and ISIS missions as the US has flown in a year.

Fast forward. Turkey shoots down a Russian aircraft which violated its airspace for 17 seconds. Why? I believe the plane was on a mission to protect our allies on the border, the Kurds.

Putin is smart and he is not going to do anything wild like attacking Turkey. But he is going to let Erdogan know that the payback will be that Turkey can no longer attack the Kurds in Syria by air or ground. Russia is now totally committed to providing air cover to the Kurds on Turkey’s border as a reply to Erdogan’s shooting down of the Russian plane. They have started building an air base there. That is why Erdogan is trying to provoke us into getting involved. For once let’s try to do the right thing.

If Turkey does something stupid again, something they may be thinking about according to the latest reports, let them sort it out with the Russians.

13 thoughts on “The Devil’s Cauldron”