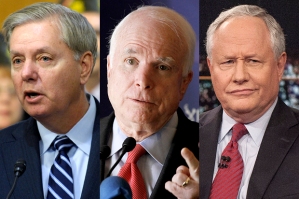 In his latest introduction at TomDispatch.com, Tom Engelhardt reveals a remarkable double standard — perhaps craziness is a better term — in the U.S. approach to terrorism in the wake of the Paris attacks.  Prominent “conservative” leaders are calling for a major U.S. military invasion of territory controlled by ISIS, even though they know that ISIS has the “home field advantage.”  They know, in short, that such an invasion will be both risky and costly, spreading chaos even further in the region, but they just can’t help themselves: they must “do something,” and the “something” in this case is sending other people’s sons and daughters into harm’s way.

But when it comes to incurring any risk, no matter how remote, to the American “homeland” from allowing refugees fleeing the chaos of the Middle East (chaos partly made by the USA and its previous military interventions, of course) to enter, these same conservative leaders cower.  We can’t let “them” in. Too dangerous!

So, where the U.S. has an overwhelming “home field” advantage, these self-styled warriors retreat into paralyzing timidity.  “Not in my backyard,” they say.  But we sure as hell will send “our” troops into their backyards.  See how brave we are in taking the fight to ISIS?

Here is Engelhardt’s introduction that so clearly highlights this tension:

In Washington, voices are rising fast and furiously. “Freedom fries” are a thing of the past and everyone agrees on the need to support France (and on more or less nothing else). Now, disagreements are sharpening over whether to only incrementally “intensify” the use of U.S. military power in Syria and Iraq or go to “war” big time and send in the troops. The editor of the right-wing Weekly Standard, Bill Kristol, is already calling for 50,000 American troops to take the Islamic State’s “capital,” Raqqa. Republican presidential candidate Senator Lindsey Graham, who has been urging that another 20,000 troops be dispatched to the region for months, offers this illuminating analogy to sports: “I’m looking for an away game when it comes to ISIL, not a home game. I want to fight them in their backyard.”

And don’t forget that increasingly angry sideline discussion about the Obama administration’s plan to let 10,000 Syrian refugees, carefully vetted for up to two years, trickle into the country.  Alternatives proposed include setting up even harsher, more time-consuming vetting processes to insure that few of them can make it, allowing only certified, God-fearing Christian Syrians in while — give a rousing cheer for the “clash of civilizations” — leaving Muslims to rot in hell, or just blocking the whole damn lot of them.

I’m all for Bill Kristol and Lindsey Graham’s warrior fervor.  I wish them every success as they deploy to Raqqa in their “away game” against ISIS.