The roulette wheel that is Presidential politics is spinning faster now that we are only one year and eight months from election day. Bets are being placed as the main stakeholders look to their future financial and career investments. The media play to the hilt this longest running spectacle that our pop culture offers. The Very Serious People (VSP) throw the rune stones and check the entrails on a daily basis so as to provide informed commentary on the state of play. Thus the world’s greatest democracy and sole superpower approaches its Quadrennial moment of decision in selecting who its next ruler will be.

So it is time to take our bearings, to cast aside the resolution made in November 2012 never again to expend time and mental energy trying to make sense of what has become a literally senseless process. Isn’t that our duty as good citizens?

On the Democratic side, matters are clear-cut. Hillary Clinton will be the nominee. Is she a compelling public personality? No. She’s a bit shop-worn and retro – like Madonna prancing on stage at the half-time Super Bowl show a while back. Her bounce now jiggles too much. Do her views conform to the dispositions and attitudes of 51% of likely voters? No. She long since has abandoned the party’s traditional constituency to cater to the rich, the vested interests – Wall Street most visibly, the national security hawks, and the pseudo reformers whose lustrous ideas always wind up hurting the common folk and accomplishing nothing for the public good (“reforming” Social Security; undercutting public education via privatization). Moreover, she has become silent as the Sphinx on some big and troubling issues: inter alia torture, electronic surveillance and the gutting of the 4th Amendment, ISIL, Ferguson, Obama’s radical trade deals. She was precipitated back into the headlines this week by the revelations of her brush with the law in the concealed use of a private email for conducting official business as Secretary of State – irresponsible and perhaps criminal. Does she have any strengths? Yes – kind of. Many educated women of a certain age still see her as their great champion. She’s a staunch advocate of LBGT rights. And she continues to evoke sympathy for being the abused wife.

That brings us to Bill – the legendary former President whose reign in the 1990s is seen by some Democratic romantics as “golden age.” It was an age that brought us deregulation of Wall Street, a launching of the myth that Social Security and Medicare had to be trimmed to save the Republic from ruin, a rigging of the unemployment and cost-of-living formulas to the disadvantage of the poor and the aged, distancing the party from unions, and the cultivation of big money as a hoped-for trade-off for the preceding. This was the method that has turned the Democrats into a “me too” version of Republican-lite.

Hold on, the Clintons’ defenders protest. Bill was a winner – whatever aspersions you cast in his direction. You control the White House, you control Supreme Court appointments – at the very least – and you keep the crazies from taking us to war in remote corners of the Middle East, estranging the entire Muslim world, and trampling on our civil liberties – like Bush did. See how much better we’ve been under Obama? Odd thing, though – Bill Clinton probably would have lost the 1992 presidential election if it weren’t for a joker in the pack, Ross Perot. The same may have happened in 1996. How easy, and convenient, to forget Perot. In short, Clinton’s wins can be seen as a historical fluke.

That means that the dominant political assessment among Democratic “pros” is based on a false premise. The pathetic Democratic performances in 1998, 2000, 2002, and 2004 testify to what the Clinton imprint on the Democratic Party has meant in electoral terms. Then there is Barack Obama. His victory in 2008 was due to two factors: revulsion against the disastrous Bush record, and his own fresh image as a Messiah (even if a Messiah without message or mission). As it was, he barely scraped though despite Sarah Palin and a diminished John McCain. The financial collapse may have saved him; when it broke, Obama was running neck-and-neck with McCain. As for his reelection, it is owed to the feeble Mitt Romney. Meanwhile, the Democratic Party has suffered its worst defeats since the 1920s in Congressional elections, despite pursuing the Rahm Emanuel strategy begun in 2006 of weeding out more liberal candidates for House seats and instead giving financial backing to more conservative candidates – the notorious “blue dogs” who undercut any progressive initiatives when the party controlled both houses in 2009-10.  They were decimated anyway in 2010 and 2014 (when millions of potential Democratic voters didn’t even bother to show up at the polls). The Democratic losses at the state level have been even more disastrous.  The 20th century’s progressive achievements are at this moment being rolled back in state after state. Reactionary agendas are being implemented. The entire American public discourse has shifted far to the right. Heck of a job by the supposed Democratic “realists.”

Those “realists” or self-styled “centrists” are now organizing to counter Elizabeth Warren’s growing influence in shaping the Democratic Party’s image. They are quaking at the prospect of what they foresee as an “electoral catastrophe” were her ideas to continue to gain currency. Two decades of the manifestly losing strategy of governing and campaigning from just right of “center” has taught them nothing. They might as well amend the party’s label to Diet Democrats or Democrats Zero. Lose votes like you lose calories.

Given this record, the void within the Party, the bleak prospects – there should be liberal challengers to Hillary. Don’t political scientists tell us that political nature abhors a vacuum? That political entrepreneurs sweep in to collect votes from the politically dispossessed? Yes they do say that. But obviously, they are wrong. Clinton faces no serious challenge, perhaps no challenge at all.  Now that Elizabeth Warren has resisted the siren song, Bernie Sanders is the only liberal on the horizon.  Technically an independent, he may decide to avoid the primaries and present himself as such – were he actually to climb into the ring. In any case, he would have to overcome the obstacle put in his way by the MSM who would disparage and belittle his candidacy as fringe.  The current interpretation of “fair and balanced” in all the news media dictates that every far-Right crack-pot is treated seriously and quoted copiously while someone like Sanders is dismissed as a non-entity unworthy of attention. There is some talk of Jim Webb, former Senator and Secretary of the Navy. He is an independent thinker with an unconventional mind – if not a liberal. At this point, though, his interest is luke-warm and his chances slim.

What the Democrats badly need is a buccaneer, i.e. an impassioned fighter who sallies into the target rich political seas with all guns firing. Or a righteous reformer who seethes with resentment at the pervasive iniquities and inequities of American public policies that are eating away at the country’s integrity and decency. In other words, a happy warrior. Sadly, Obama and his generation X peers find their model of leadership in Ronald Reagan rather than FDR. Consequently, they’ll keep losing – votes, legislative battles, the historic struggle for the country’s soul – even as they gaze complacently down the green fairways of careerist contentment.

So it’s Hillary by default. You can’t beat something with nothing. Her ultimate fate in the general election comes down to this simple proposition – in my opinion. If the Republicans nominate a candidate who is ‘sane’, she loses; if they nominate someone who is ‘insane’, she wins.

What are the odds on the GOP going one way or the other? 50/50. There will be a veritable plethora of Tea Partiers reaching for the magic ring – as there was in 2012. Their number includes Ted Cruz, Mario Rubio, Rick Perry, Rand Paul and Scott Walker – among others soon to come. And lest we forget, there is Ben Carson the black doctor from Oklahoma who is running second in national polls. He rejects evolution, equates homosexuality with bestiality, wants to get rid of the income tax, claims that Obamacare is the worst thing to happen to America since slavery, and is an admitted plagiarist. A neurosurgeon instead of a pizza salesman; I guess that’s progress. In the not so distant past, these radical reactionaries would not stand a chance of getting the nomination. But times have changed. The Tea Party constituency represents almost half of those who vote in Republican primaries. They will come out for anyone who loudly trumpets their creed. Nothing else counts for them. In 2012, that was manifest as first one then another far Right Saviour rose and fell with each winning roughly the same share of the vote in primary after primary. There was Bachmann, then Cain, then Perry, then Gingrich, and then Santorum – even Santorum. Probably the most promising of this year’s lot, Paul Ryan, decided not to run for unexplained reasons.

On the ‘sane’ side we find Jeb Bush, Chris Christie (more or less) and various low-voltage Republican governors who may venture out in the hope that a chance lightning strike will make them incandescent. Christie was Wall Street’s and the media’s early favorite. This was a bit surprising in the light of Christie’s antic personality, reputation for slight-of-hand, and the liability among primary voters of being soft on gay rights and abortion. Still, with some anger management counseling he looked viable. Anyway, there just didn’t seem to be many alternatives. Christie resolved the matter by being caught in a series of outrageous scandals that have placed him on the cusp of entering the Guinness Book of World Records for corruption (developed world sub-category). Some in the Republican Establishment made repeated attempts to revive the political corpse. They were aided and abetted by several VSP, led by the editors of The New York Times, who apparently felt that they were obliged to do their paternalistic civic duty by promoting Christie as the ‘responsible’ GOPer. Their extensive, favorable coverage – matched only by what had been their fawning treatment of Hillary – has been to no avail, though, as Christie’s resume acquires new blemishes on an almost weekly basis. 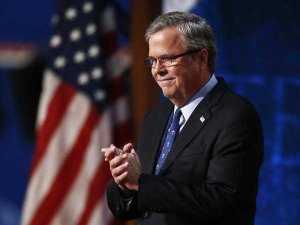 In your heart, you know he’s a Bush

That left Jeb – who is the new darling of the Establishment. For the Establishment’s Republican wing, he’s a potential marketable item who can block the White House’s falling into the grasping hands of the other family dynasty – the Clintons. For the Democratic wing of the Establishment, Jeb is the most responsible person out there whom they are honor bound to favor over his more extreme Tea Party rivals.  Neither seems the least disturbed by Jeb’s surrounding himself with a score of advisors who are the castaways from the Bush Iraqi shipwreck: Paul Wolfowitz, Donald Rumsfeld, et al – and even the inimitable Michael Chertoff of Katrina infamy.

That’s about it. Looks like Hillary vs Jeb. Place your bets – or write off the whole thing as a bad joke and shut the sound.

Michael Brenner is a Senior Fellow at the Center for Transatlantic Relations and Professor of International Affairs at the University of Pittsburgh.  Article used by permission of the author.

6 thoughts on “The 2016 Presidential Frolic Is Here”