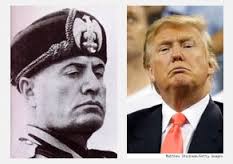 P.J. offers a direct commentary on “democracy” in the USA. The sham “democracy” of the plutocrats has sown the seeds of nascent nationalist fascism with this election of a domestic “Il Duce,” like the strutting Italian megalomanic Mussolini. The American version is not only “unpopular,” but he seems temperamentally unqualified for the job.  Voting may not deliver the high of an “opiate,” but it is a convenient mask for our self-serving “leaders” to hide behind in their claim that they represent the “people’. – b. traven

How could someone as unpopular as Donald Trump be elected president in a democracy?  It makes no sense. The answer is simple: America is not a democracy. Doesn’t this election prove it? In fact, the U.S. has never been a democracy. Democracy is myth. Democracy is a buzzword. Long ago, James Madison said that the purpose of government is to protect the rich. That is not democracy; that is plutocracy, and don’t the plutocrats always win? It was the plutocratic 1% that selected the Donald, not the 99%. FDR said that presidents are selected, not elected, and they are not selected by the voters. It was the plutocrats who selected Hillary Clinton. They gave voters a choice, between Tweedledum and Tweedledee. Don’t call it democracy.

The election was rotten with corruption. More than enough to change the outcome. Maybe the Russians meddled in it, maybe not, but voter suppression certainly did. The voting machines were hackable and programmable. The gerrymandering, the long lines at the polls in Democratic districts, the purging of voters by Interstate Crosscheck and needless ID requirements. The provisional ballots issued by the thousands to African-Americans and Hispanics who thought they had voted but whose votes will never be counted. The election was a criminal farce.

The most popular candidate, Bernie Sanders, never had a chance.  As a socialist he was unacceptable to the plutocrats of both parties who decide these things. Never mind that the people wanted him. The U.S. has never elected a socialist. The people be damned. Money prevailed. Big Money had its way, and this is not the first election it has stolen. In fact, most presidential elections in this century have been stolen. It is a pattern. When will it end? Who will stop it, now that the voting rights act has been repealed, opening the floodgates to Big Money corruption. Heaven help us!

So let’s have no more talk of democracy. It is a fairy tale. Voting is the opiate of the people, nothing more.

8 thoughts on “Don’t Call It Democracy”