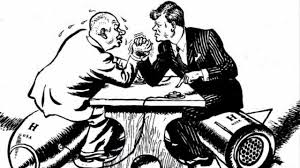 I lived through the Cuban Missile Crisis of 1962, but as a sophomore in high school I didn’t know much about it beyond the lurid newspaper headlines and heavy mouth breathing of U.S. government officials. We “won,” of course, but unfortunately the lesson drawn by successive generations of American officials — especially those infesting the U.S. government today — consists of a single quotation from JFK’s Secretary of State Dean Rusk: “We’re eyeball to eyeball and I think the other fellow just blinked.”

In the years following this near disaster, I came to understand the details of the trade-off made between Kennedy and Khrushchev: the Soviets would withdraw their nuclear missiles from Cuba and the United States would withdraw its nuclear missiles from Turkey. (The U.S. missiles in Turkey have long since returned). The American concessions, however, had to remain secret from the American public lest it come to light that we had “blinked,” too. Yes, we had the military advantage near our own — and Cuba’s — shores, but the Soviets had the military advantage in Berlin and other places closer to their borders. It made sense to do a deal and so a deal got done.

Regrettably, though, the United States government could not publicly admit that it had made any concessions because that would have implied “weakness” which would have undermined America’s self-image as omnipotent and destined to prevail in any contest, any place, any time, and for any reason. This deliberately inculcated delusion has now reached almost suicidal dimensions. The United States simply assumes that those nations with their own vital interests to defend will automatically “blink” if only the hyper-militarized American government stares hard and long enough into their eyeballs.

To refresh my memory, I did an Internet search on Secretary Rusk’s iconic phrase and came across an essay on the subject at the Council on Foreign Relations blog, The Water’s Edge, written by James M. Lindsay, entitled TWE Remembers: Eyeball to Eyeball and the Other Fellow Just Blinked (Cuban Missile Crisis, Day Nine). Short and to-the-point, I think it says a great deal that Americans would do well to keep in mind today.

As I have watched my country become vastly over-extended militarily — and nearly bankrupt from the gargantuan costs of maintaining an imaginary “full spectrum dominance” everywhere on Planet Earth — I have often wondered why America’s rivals and competitors — I won’t call them “enemies” — don’t simply liquidate in short order some of America’s more obviously provocative yet utterly defenseless outposts as an object lesson to America’s deluded policy makers. Then I remember that scene from The Count of Monte Cristo (2002), a film by Kevin Reynolds, wherein the dissolute aristocrat Fernand de Mondego sits at a casino roulette wheel gambling away his family inheritance. Through an open door nearby, Edmond Dantes and his sidekick Yacopo look on. Observes the laconic Yacopo: “He’s losing at the other casinos, and they’re not even cheating him.”

Therein, I think, lies the truth of today’s situation for America in the world. Our self-styled “leaders” believe that they need only toot their own horns, pat themselves on the back, squander taxpayer dollars like a drunken Reagan, and stare into other people’s eyeballs until they “blink,” Too bad for our country, the rest of the world has learned to bide its time, patiently, until the United States cheats its own self into well-deserved insolvency and obsolescence. Why even bother doing to the United States what it will do to itself in any event?

Given Murphy’s Law, the nuclear thing will go wrong in any way that it can, most likely with an electrical short-circuit or computer glitch causing one (or several) of America’s own bombs to detonate in either a missile silo in Nebraska, a B-52 flying over New Jersey, or a submarine moored at Ballast Point near San Diego. Whether anyone else “blinks” or not, it would seem inevitable that the United States will cheat itself to death, one way or another. In Shakespeare’s melodrama, Hamlet could not decide whether to live or die. (Messing around with metaphysical Aristotlean “being” certainly didn’t help clarify things). In the end, he did the latter, as much at his own hands as any other’s. That happens when people believe in ghosts (or, “higher fathers”) and what they say the ghosts urge them to do, whether in Elizabethan England or the United States.

Finally, whatever President Obama says or does not say matters not at all. Who even listens to him any longer? Certainly not his Pentagon, CIA, or deep-state neocon apparatchiks busy sabotaging his policy at every turn. And since his own government won’t listen to him or take him seriously, why should anyone else? What an obscene joke the U.S. presidency has become. It pretty much sums up the incoherent and incompetent, if not dishonorable, U.S. Government that President Obama hasn’t fired Aston Carter and John Brennan for insubordination or that John Kerry hasn’t resigned because his own president won’t back him up when he makes deals with foreign countries. T.S. Elliot once wrote that the world will end “not with a bang, but a whimper.” Certainly the Obama administration will end with its tail tucked proudly between its legs, but nothing guarantees that the world and the Obama administration won’t end simultaneously, with both a whimper and a bang.

“How to blink without appearing to do so?” Therein lies the real question for America’s self-infatuated “leaders.”

4 thoughts on “Eyeball to Eyeball with the End of Empire”