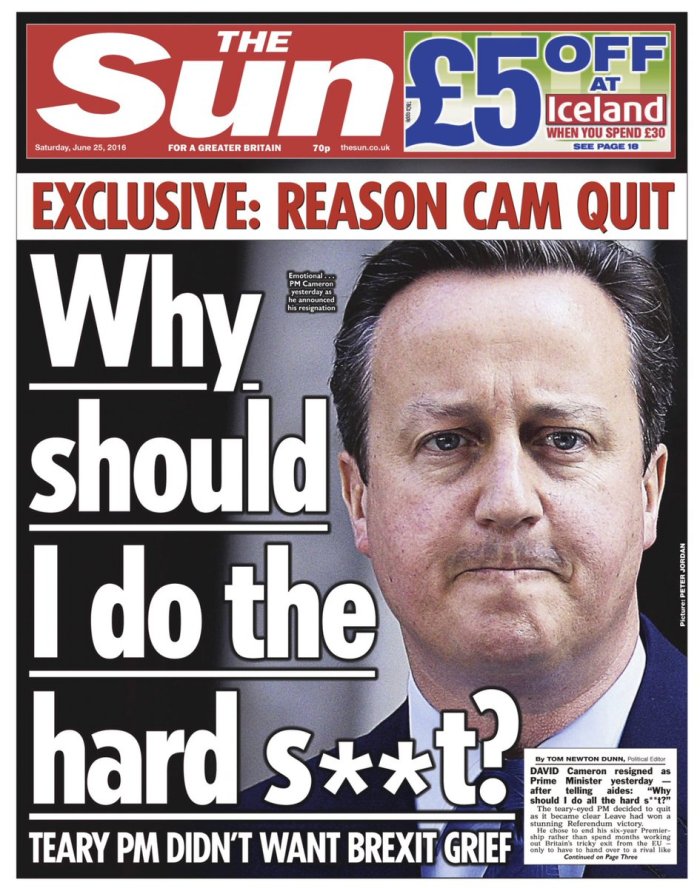 The Contrary Perspective was probably the only media to run a thoughtful article on the British vote. And that includes not just the MSM but the alternate media like RSN, Alternet, The Nation, Huff Post etc. The comments on the story, by our English contributor, Alex Dunn, and our foresightful editor, Stuart Lyle, now living in England, showed a wide range of American opinion.

In the run up to the Brexit vote there was virtually no American media that gave our citizens a ‘heads up’ on the possible repercussions to our country of a British exit from the EU. Only after the unprecedented 500 point drop in the New York Stock Exchange on Friday did it become a story. Our media has it’s head so far up its behind that the story just did not exist.

But let’s stop looking at our navel and examine the tremendous fallout that this momentous decision will have in the UK (all of which will be again virtually ignored by the MSM in favor of commenting on how it will effect Trump’s campaign).

Scotland may secede from the UK. That’s big news. Scotland voted about 65% to stay in the EU. With the UK leaving the EU, Scotland, whose vote to leave the UK less than two years ago failed based on promises from Cameron, the British Prime Minister, and the threat that leaving the UK would force them out of the EU, now have a clear-cut reason to change partners – from the UK back to the EU.

Another story not being told by the MSM is the reason that PM Cameron resigned so quickly after the vote.  Cameron alone made the decision to hold the referendum in order to win a few votes in the recent election campaign from the far right wing UKIP party who were pushing “exit” to keep migrants out of England. He made that decision for his own personal ambitions, not for the welfare of England’s citizens.

Unfortunately we see this same selfish reasoning from both the Republican and Democratic Party leaders in our government. The vote for “exit” in the UK must be put alongside the vote in the Labor Party for Corbyn, the Bernie Sanders of England, as a vote against the smug party elites who have ruled Britain under Labor’s Tony Blair much like Hillary Clinton’s, as “elites” out of touch with “the people.”  Trump represents the same backlash against the Bush family and the corporate Republicans.

Cameron exposed his country to the fallout from “exit” for his personal political gain not for the country, and we see both of our current Presidential candidates and their party backers following the same course: “me first, then the country.”

They will give away our crown jewels to get elected.

25 thoughts on “BREXIT, Don’t Trust The Political ‘Elites’ in Britain or Here”