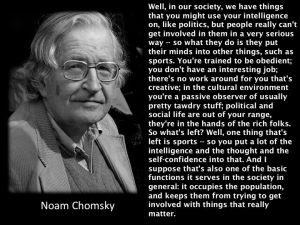 The other day I was jogging through the streets of Williamsport, PA (home of the Little League World Series) and noticed in one neighborhood three Pittsburgh Steelers flags. Although I’m not a sports fan now—I was when I was a teenager—I occasionally flip through the channels of my TV and watch a few minutes of a baseball or football game. What never ceases to amaze me is seeing tens of thousands of fans in the stadiums of these games, fans who probably seldom if ever get bored or tired observing these very uninteresting, at least from an intellectual and aesthetic perspective, events.

Day after day, at home or at the stadium or arena, fans and spectators always seem enthralled by what they see. Their enthusiasm never seems to wane. It’s a fair question to ask if the enthusiasm for watching sports events could be a major reason (no pun intended) why so many adult Americans seem to be either indifferent to or ignorant of political and social issues.  (I use the word “seem” because I can’t cite any empirical study that would support this claim; I rely here only on my personal observations and intuitive sense of the interests of the population in general.)

For instance, do most Americans know the issues in the Edward Snowden case or the reasons for the war in Iraq or why we don’t have national health insurance as every other developed country in the world has?  I doubt it.  Yet most adults (especially men) are experts in trivia related to football, baseball, hockey, and the like.  Go to an on-line comment board about Tim Tebow or A-Rod and you’ll see a few thousand impassioned and informed comments.  Go to a site on vitally important political questions and you’re lucky to see a few dozen similar comments.

Contrary to what I was taught in the early years of my education and at summer camp, I don’t believe that spectator sports have any redeeming value such as teaching fair play, sportsmanship,  promoting sensitivity to the rights of the other person.  Rather, spectator sports are a distraction, often not even an emotionally healthy distraction, from the important things which are going on in the world and in one’s own personal life. In fact, rooting for a team to win in any sport entails being out of touch with reality since teams are really only abstract concepts.  For most fans, the teams have no real existence except in one’s head.  Players, coaches, and team contracts exist as do stadiums and arenas but not “teams,” and sports fans root for teams.

The cognitive process of treating abstract concepts as if they were real entities, as if they were persons or groups of people, is called reification. For example, if all the players of the Pittsburgh Steelers and their coaches were traded overnight to the San Francisco Forty Niners it would be the height of absurdity to continue to root or support the Steelers or the Forty Niners if one has been a fan of one or the other team.

A ball club doesn’t exist without its players; otherwise it’s just a name.  Recall here the Jerry Seinfeld joke that due to constant personnel turnover what fans really end up rooting for is laundry (team jerseys) rather than a team.

Now, there is nothing morally suspect about being a sports fan or cheering on a team even if the team is just an abstract concept. But being an ardent sports fan is often a major, even toxic, distraction from learning about and acting on the vital political and social issues of our time.

Even more importantly, an argument can be made that spectator sports help to foster the “we” vs. them” perspective: citizens of a nation defining themselves as the “we” who must be fighting a perpetual enemy in the world, or within their own society, in order to maintain a sense of  identity or purpose in life. To paraphrase John Lennon’s song, “Imagine,” imagine there’s no “them,” only “us.”

Could teaching people what reification is promote world peace?

Imagine if we could fill sports stadiums and arenas to overflowing with impassioned fans cheering for world peace.  It’s easy if you try.

Richard Sahn is a professor of sociology and an at-large contributor to The Contrary Perspective.

2 thoughts on “The Problem with Spectator Sports”