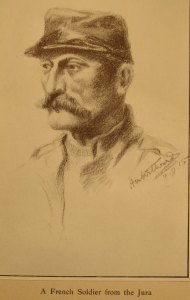 The French showed great resolve in 1915. A century later, that resolve yet lives

The world is still trying to digest the horrifying news from Paris of terrorist attacks by ISIS.  We sympathize with all the victims of terrorism and other forms of violence, and we stand with France and its desire to bring the perpetrators and their accomplices to justice.

Yet we also must be careful not to overreact — not to play into the hands of ISIS and similar terrorist organizations.

French President François Hollande is already on the record as vowing, “We are going to lead a war [against ISIS] which will be pitiless.” But the answer to terrorism is not “pitiless” war.  That’s exactly what terrorists want: they thrive on war and endless cycles of horrifying violence.

I understand Hollande’s rhetorical purpose.  He’s saying: We’re united, we’re tough, we’ll avenge the murder of innocents.  But pitiless war has been tried again and again in history — and it begets more atrocities and more war.

Terrorism is nothing new.  What’s new is the way the West is elevating it into a generational war — another crusade.  We must be very careful not to let the rhetoric of “generational” and “merciless” war become a self-fulfilling prophecy.

We must also be careful not to overreact to the threat of terrorism.  In spite of the latest horrifying attacks in Paris, the threat of terrorism remains remote for the vast majority of us.  The answer to the terrorist threat is not more state surveillance, not more military reprisals, not more curtailments of individual freedoms in the false name of security.

What is the answer?  Resolve.  Patience.  Cooperation (e.g. international police work, intelligence sharing, and so forth). And action.  Anger and cries for revenge in the form of “pitiless” war are natural after a profound shock, but they are not smart policy. Injustices committed in the name of “pitiless” war will not bring justice to the victims of the Paris attacks.

7 thoughts on “Terrorism in Paris: A Few Thoughts”