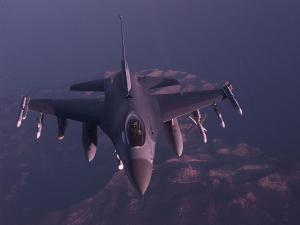 Time to let our pilots open a can of whoop-ass?

In a recent piece in Foreign Policy, “No One Talks About Liberating Mosul Anymore,” Michael Knights wrote about the necessity of training better Iraqi forces and unleashing U.S. airpower in Iraq to fight the so-called Islamic State (IS).

“It’s time to let the U.S. military get creative with partners on the ground — and let pilots above open a can of whoop-ass on the Islamic State,” reads the epigraph of the piece.

Knights couldn’t be more wrong about a prescription for the situation. He’s doing what neoconservatives usually do in situations like this – ignore history itself.

This kind of bravado associated with caricatures of the American military has no foresight about the consequences of increasing military action. Let’s say we follow through on Knights’ proposal and bomb Mosul back to the Stone Age – then what? Reoccupy the country? And then what?

Knights would most likely respond that he favors drastically increasing the Iraqi Train and Equip Fund from its purportedly meager sum of $1.6 billion in 2015 to its previous levels during the 2005-2008 surge. But how successful was that strategy?

A recent look at the historical record confirms its partiality. Patrick Cockburn, writing in the London Review of Books, reports that in June 2014, 350,000 Iraqi soldiers and 650,000 police, trained and funded by $41.6 billion of U.S. taxpayer dollars, abandoned their posts and let Mosul fall to a paltry 6,000 opposing IS fighters.

So, if the train-Iraqis-to-defend-themselves scheme is vacuous, then what? Why, I’d say, we’re back to the old neoconservative vision of nation building. And that’s exactly what the familiar voices of the Right, like Robert Kagan or Paul Wolfowitz, have been openly calling for since IS first came into the picture last year– bolstering up American hard power, reintroducing U.S. troops, and funneling billions to prosecute yet another unwinnable war.

For America’s war hawks, history seems to be a throbbing sensation that they choose to ignore. They ignore that America has consistently failed to nation build over the last century. Regrettably, they cite the Marshall Plan that facilitated the rebuilding of Europe after World War II as a successful precedent for their policies.  Yet in doing so they fail to examine the vital differences between then and now – namely invading a nation unprovoked, as U.S. forces once did in Vietnam, and did again with Iraq in 2003.

Our first real experiment in nation building was, according to Jeremi Suri, Reconstruction – yes, the aftermath of the U.S. Civil War, when the U.S. tried to mend a nation torn by slavery and white supremacy and war. We failed (and here I express disagreement with Suri). The unresolved problems of the Civil War allowed for over a century of lynch mobs, brutal racial violence, and intimidation against black Americans.

A yen for nation building may be in our national DNA, but our record at it should give us pause.  Certainly, it’s nothing to celebrate.

The depressing and odd part of this is that war hawks like Kagan do in fact read and review these things. Nevertheless, they persist in advocating for more war, constructing dreams of future victories that are entirely divorced from the nightmarish realities of recent history. In effect, they choose to ignore or rewrite history for their present needs.

The U.S. military shouldn’t keep haplessly training Iraqi forces in Iraq – the strategy did not win the war during “The Surge,” and it won’t win it now.  Just look at Syria today.  If anything, the so-called “moderate rebels” of Syria have been defecting to IS after receiving cash, weapons and training from – you guessed it – the United States.

It’s time to own up to history. It’s time to recognize the blowbacks of invasion and occupation for what they are: the greater problems of empire and the failure to learn from them as policymakers.  Otherwise, our nation will keep repeating the same mistakes again and again — a surefire recipe for strategic disaster and national failure.

Jack Werner has been published by Foreign Policy In Focus, Informed Comment, Antiwar.com, the Lion’s Eye, the Signal, and State of Nature. He hosts a webzine at worldatlargemag.wordpress.com.

7 thoughts on “The U.S. Military Should Stop Talking About Liberating Mosul”