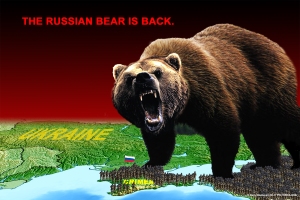 Or so our generals keep telling us …

At the reliably up-to-date and highly informative website Breaking Defense, Sydney J. Freedberg Jr. reported that on June 16th, Lt Gen James Kowalski, Deputy Commander of the US Strategic Command, told a group, “We have to recognize that there are two authoritarian nuclear-armed regimes [China and Russia] dominating the Eurasian landmass, and they are using or threatening to use a broad spectrum of force against their neighbors.”  Kowalski could have more accurately said, “The US is a nuclear-armed plutocratic oligarchy that garrisons the Eurasian landmass and uses or threatens to use a broad spectrum of force against distant regimes,” but no one expected him consider the wisdom of Matthew 7:3-5 and promptly lose his job and any hopes of a lucrative defense industry contract later.

Using the myth of an expansionist China as an excuse, the Obama administration adopted a provocative military “pivot to Asia” in 2011 and precipitated a dangerous dance that continues.  Still, Russia as the Great Bogeyman is deeply embedded in the American psyche and makes it difficult for US policy makers to pick its favorite enemy, China or Russia?  Just last week, the latest nominee for Chairman of the Joint Chiefs of Staff, Marine General Joseph F. Dunford, decided to check the Russian box as posing the greatest national security threat.

Before addressing that further, here is a short multiple-choice test that suggests a little historical context to consider:  (The choices are China, Russia, the US, or none.)

1 – Over the last two decades, which country has spent more than twice as much on its military than the other two combined?

2 – Over the last two decades, which country has sent its warplanes thousands of miles from its shores to bomb several countries?

3 – Over the last two decades, which country’s military has spread “collateral damage” (death and mayhem) from Afghanistan to Iraq to Libya and points beyond, resulting in the death of more than 100,000 innocent civilians?

4 – Which country provides weapons and/or military training to over half of the countries in the world?

5 – Which country has hundreds of military bases beyond its own borders?

6 – Which country has aircraft carrier strike groups in the Atlantic, Indian, and Pacific Oceans?

Quickly review those questions again, then pause a few moments to ponder the fact that the answer is the same in every instance.  Yes, the USA.  Hmm.  So, what can we reasonably deduce from all this?  What are the obvious implications?  It doesn’t take a military genius to figure them out.

First and foremost, it is clear beyond cavil that, although certainly not in every respect, US foreign/military policy today largely reflects the core idea articulated in National Security Council Paper NSC-68 of April 1950 (and sharpened by Dick Cheney’s Project for the New American Century), i.e., the vile and dangerous notion that the US and its interests can best be secured by the use or threat of use of military force, not diplomacy.  This is one reason why the US sends its armed forces hither and yon around the world in search of monsters to destroy and, whether intentional or not, creates them.

Now, back to the present:  Absent a great deal more misleading inflammatory propaganda, in the near term China is unlikely to be thought of as an existential threat by most Americans for two excellent reasons.  There is clearly no overarching concept of “China as enemy” in the minds of most Americans; and, more significantly, any reasonably objective observer who cares to study the matter can only conclude that China shows no sign that it even wants to pose a military threat to the US and its allies.  It seeks to instil not fear but closer ties and more cooperation, even while maintaining powerful might that must be respected.

But Russia?  Consider the very troubling situation in and around the Black Sea.

Russian concerns over the military actions of the US and its allies in the area are understandable:  Of the countries surrounding the sea, the US military considers Georgia, Moldova, and now Ukraine as “close partners” and has a new Navy base in Romania, three Air Force bases and an Army base in Bulgaria, and two Air Force bases in Turkey. And, as if that is not worrisome enough, the US and its NATO allies have – in addition to staging numerous other military exercises in east Europe – conducted a series of exercises in the Black Sea, the most recent of which involved 30 ships and ended July 12th.  Are we actually trying to prod the bear?  A volatile tinderbox has been created, regrettably one largely of the US’s own making.

Immediate, sober, and calm diplomatic rethinking is imperative.  It would not be a sign of weakness for the US and NATO to promptly stand down, back up a little, and use uncommon sense.  That would be both a sign of decency and respect as well as a positive step to avoid creeping further to where neither the American nor the Russian people, or even their militaries for that matter, want to go.

Please help us here, President Obama.  You, too, President Putin.  The entire world knows that neither of you is afraid of war.  Now please show us that you are brave enough for peace.

Born and raised a Quaker, Nile Stanton is an instructor at the University of New England at its campus in Tangier, Morocco.  He taught for twenty years at U.S. military bases in Spain, Italy, Bosnia, and (mostly) Greece, as well as online to troops in Europe and Asia.  His signature course was on “Law, Morality, and War.”

4 thoughts on “President Obama:  Please Stop the Race to War”