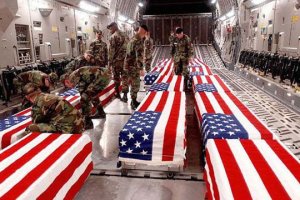 Since the end of the Vietnam War, when it eliminated the draft, the United States has relied on an “all-volunteer military,” or AVM.  But that military, as one would expect, has not drawn equally from all segments of American society.  Its recruits have been more rural than urban, more Southern and Midwestern than from coastal regions, more conservative and evangelical than liberal and non-denominational, and certainly more working and middle class than from the affluent upper classes.

Is there a problem here?  Some would answer “no,” but today’s AVM is not the citizen-military of World War II, which drew in a fairly equitable way from all sectors of American society.  Today’s AVM defines itself as a breed apart, as separate from and superior to the masses who choose not to serve.  And in some sense it is a breed apart, because we have allowed it to become so.

This band of self-styled warriors is augmented increasingly by privatized military corporations, or mercenaries in plain speak.  (Indeed, some service members, when they leave the AVM, choose to join privatized military corporations, often doubling or tripling their salaries in the process.)  National Guard and Reserves complete the picture, units of which have been deployed to war zones far more frequently than anticipated since 9/11.

So, the U.S. military today is a curious amalgam.  An AVM or “professional” military, supported by privatized corporations/mercenaries and “weekend warriors,” deployed to foreign locations, acting to guard and sometimes to extend an imperial frontier, often celebrated by gushing politicians and a fawning media as “heroes” and as “the finest fighting force ever,” even as that military is connected less and less tangibly to the American citizenry.

And it’s that very decline in tangible connections that accounts for much of the military boosterism in America.  Most Americans lack any clear sense of what the military does; they certainly care less than they should; but what they are willing to do is to “salute” the troops by buying a beer in a red-white-and-blue can or putting a magnetic ribbon on their SUV as an expression of “support.”

Having served myself in the AVM for twenty years, I confess to respect aspects of it while increasingly being uneasy at its current composition and direction.  Why?  Because its composition is less than democratic, and its missions are even less so.  These hard facts are nothing new in history, even in America’s history, even when we had a draft.  Just read General Smedley Butler’s War Is A Racket. What’s new is our acquiescence as a people in the transformation of our military as warriors and mercenaries to well-heeled special interests.

Our nation has betrayed its troops in a strange way — by loving indifference.  Even as the military kills in our name, we choose to look away, sometimes in horror at the face of war, most often in lack of interest.  Even when we show interest, it’s the interest of cheerleaders jumping in celebration, or of fans enthusiastically or politely applauding from the sidelines.  The vast majority of Americans choose to have no real skin in the game.

What our military needs is not gushing cheerleaders or applauding fans but determined critics.  It needs to be challenged.  It needs a good ass-chewing, especially of its decision-makers at the top, the brass.  We sure as hell can’t wait for our “leaders” to do this.

Recent presidents have become cheerleaders-in-chief rather than commanders, nearly all of our Members of Congress have joined the pep squad, and the few critics who exist have been marginalized or attacked as being unpatriotic.

Even as our military becomes less democratic, less a representative sample of the people, we the people refuse to know our military.  We especially don’t want to know what it does in our name (especially the bad stuff, which is largely kept secret from us anyway).  So we end up worshiping a fantasy military, a manic pixie dream military, a figment of our imagination, an amalgam of films like Saving Private Ryan (WWII idealism), Top Gun (technological wargasm), and Act of Valor (Rambo/cowboy histrionics).

We refuse to know our military and what it does.  And if the people don’t know the military, and if the military is not drawn fairly from the people, you have a ripple, a rent, maybe even a fatal fault line, in the political and social life of the Republic.

17 thoughts on “Betraying the military (and democracy) by loving indifference”