If we can believe the N.Y. Times—and if we can’t believe the N.Y. Times, whom can we believe?—the American Catholic bishops meeting in Baltimore last month led to professions of confusion about what course to follow in the wake of the recent synod in Rome devoted to the family.  Most of the bishops had expected a declaration that the family was a Good Thing, only this time with heightened emphasis backed up by still more pious boiler plate to that effect.  This they, the overwhelming number of them appointed by John Paul II and Benedict XVI, felt was just the ticket to counter all the alarming things that Francis had been saying relative to the Church’s attitude towards homosexuals.

Then there were two ironically juxtaposed pictures, one right above the other, that, given my macabre sense of humor, I found amusing in a chilling sort of way.  The top one had to do with the bishops, the lower with something quite different.  Taken together, they made for an ironic juxtaposition that wonderfully illustrates the current American Catholic hierarchy’s shameful refusal to confront what the Vatican once termed the most urgent moral issue of our times: the peril to humanity posed by modern weaponry, nuclear arms first and foremost—not to mention the vast sums spent (and will continue to be spent) on their maintenance and “modernization” (i.e., improving their kill capacity),  a continuation of a policy that Dwight Eisenhower termed “a theft from the poor.” 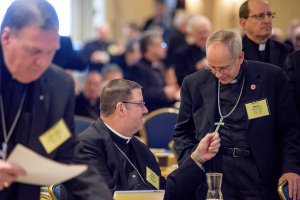 The top photo shows a bishop fiddling with the cross of a second while others mill about.  The lower shows a B-1 bomber (which itself stole and still steals a tidy sum from the poor) releasing a new “intelligent” missile that is not just smart but possessed of a veritable post-doctorate.  (The new missile can select its own targets guided by “artificial intelligence,” i.e. clever software coding by sinful and error-prone humans.)

The heading above each article reinforces the irony: “U.S. Bishops Struggling to Follow Francis’ Lead” and “Missiles That Can Decide Whom to Kill Raise Fears and Stir Debate.”  They didn’t to stir any debate among the bishops, needless to say, since modern war was not on their agenda—nor was economic inequality, nor was global warming.

Relative to all of this, I think we should junk the terms “liberal” and “conservative” as being devoid of meaning. Tell me, do clerics who think gay marriage is a more pressing moral issue than the inevitable approach of nuclear Armageddon deserve the once honorable name of “conservative”?  Surely even the most modest nuclear “exchange” is not going to do much to conserve the families they profess to so cherish.   And am I a “liberal” Catholic, somebody who struggles to get to Mass everyday, because I believe mass slaughter is something that Jesus Christ would and does frown upon?

Yes, the pope has made some statements that greatly disturb the reactionary American Catholic hierarchy.  My problem is that he hasn’t disturbed them enough. And that’s why I’ll remain not wild but just mild about Francis until he starts to talk about nuclear weapons and their awful realities.

Michael Gallagher’s book about Catholic activists won the National Jesuit Book Award theology (because it was the funniest in that category, he claims) and his translation of Yukio Mishima’s Spring Snow was a finalist for a National Book Award in translation.  He served as a paratrooper in the Korean War and is now at work on a polemic memoir.

One thought on “Of Fiddling Bishops and Intelligent Missiles”