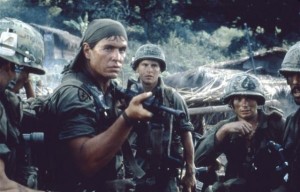 Scene from the movie, “Platoon”

The other night I was watching the movie “Platoon” on television. An American soldier was killed every few seconds while the platoon was immersed in a firefight with North Vietnamese regulars near the Cambodian border. In one scene the body of a dead GI was used as a shield as bullets were being fired at his body. Indeed, the horrors of combat were not minimized by the screenplay writers and director. After the carnage bodies of GI were bulldozed into a mass grave.  Both sides were undoubtedly under orders to kill anything that moved if it looked like the enemy.

As a professor at a rural college in Pennsylvania I see students, male and female, walking around the campus or in class in their camouflage uniforms. They may be in the Army reserves or National Guard on their way to or from exercises at the local armory.  “Platoon” reminded me of the death toll, the suffering, the serious injuries which produced chronic medical problems that were the result of the war in Vietnam.  Do these reservists and weekend warriors know what they could be in for if they are eventually sent on combat missions?

Of course most of them don’t really know. They are not students of military history nor have they watched graphic combat movies with an eye toward understanding the horrors of war. But they know that serving in the military will pay the bills and, if they’re male, will make it easier to get dates. Then I think of what Robert S. McNamara, the former secretary of defense under John F. Kennedy and Lyndon B. Johnson and who was the principle architect of the Vietnam War wrote in his memoirs:  that the war in Vietnam was essentially a mistake, that it was unnecessary.  Too late for the GIs who were killed or wounded in that war.

Yet so many young men were forced, primarily through the draft, to fight a war that had no real purpose except for the belief that it was un-American to lose (prolonging that war was certainly no loss for defense contractors). Today, it’s not the draft but often economic necessity that compels college age people to join the military. And it is also a sense of patriotic pride that justifies any reason for engaging in future combat.  Combine a shortage of jobs with incentives and patriotism and you have plenty of “volunteers” for the all-volunteer military.

Patriotism, often a major factor why young people join the military, gets mixed reviews from me. If patriotism means concern for the safety, protection, and well being of one’s countrymen I’m all for it. If it simply means love of country in the abstract, the kind of “love” that’s displayed during patriotic holidays I have a problem. Here patriotism is either culturally acquired—the process sociologists call socialization—or, as Samuel Johnson, once put it, “patriotism is the last refuge of a scoundrel.” What Johnson meant, of course, was that patriotism eliminated the gray areas of social life, of reality itself, reducing existence to the lowest common denominator: my country right or wrong. All cognitive dissonance is dispelled. All personal transgressions obliterated.

The image of the GI holding as a shield the corpse of his buddy continues to haunt me.  During the Vietnam War the draft, economic interests, blind obedience (as demonstrated by Stanley Milgram in his obedience to authority experiment at Yale) and the mindless type of patriotism were all responsible for such a scene which had to have occurred more than once during the actual war.

All this in the cause of delusional thinking by political leaders that McNamara alluded to in his book:  Allowing Vietnam to go communist would have an international domino effect, false fears accentuated by the desire of Johnson, General William Westmoreland, and Richard Nixon and those like them never to “lose” a war.

From the pacifist perspective war can never be justified. From the “just war” perspective—my own perspective—war is justified if it’s for purely self-defense. From the perspective of loved ones who suffer the pain of loss—the parents, girlfriends, spouses, children—war is unthinkable no matter what the cause.

Richard Sahn is a Contrary Perspective regular and a professor of sociology.