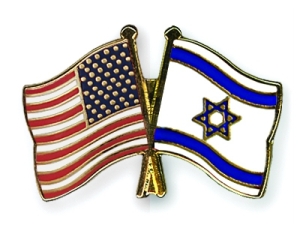 Will the Russian flag soon replace the American flag in this image?

Richard Silverstein, who authors what I consider the most authoritative blog on Israeli politics and policy, has a take on a shift in Israeli foreign relations that should interest those Americans who are following affairs in the Middle East. In an article titled “Israel Turning from U.S. to Russian-Arab Autocratic Alliance” (read the entire article here)  Silverstein puts forward the case that cool relations between the current US administration and Netanyahu have pushed Israel’s right wing government to firm up old ties with Russia and the neighboring authoritarian Arab states. Few Americans who are big boosters of Israel realize that Russia (then the Soviet Union) is an old friend of Israel being the first international power to recognize the state of Israel in 1948.

A potential realignment of Israeli policies in concert with Russia sets up some interesting implications for America’s political acrobats. Since it is now a requirement for both political parties to demonize Russia for their Ukrainian intervention and to praise Israel for its controversial Gaza aggression, they will have to square that circle. The Republicans who generally cleave to authoritarians may be more willing to accept this little sidestep of Israel while the Democrats will gyrate and flip-flop on how to rationalize their hatred of Putin for messing up their neo-liberal coup in Ukraine and still hold the love of AIPAC, the powerful American Jewish lobby.

Quoting Richard Silverstein: “The reasons for the souring relationship with the U.S. are clear.  From the beginning of the Obama administration when it failed in its push for settlement freeze, to the most recent failure of John Kerry’s Israel-Palestine peace talks, the handwriting is on the wall.  Bibi and his ideological partners in government detest this administration and the feeling is mutual.  The Israelis see the U.S. as weak and ineffectual.  Unable to stand up to the west’s real enemies: Islamists, whether they be in Lebanon, Iran or Gaza.

So as Netanyahu and Obama have become mutually disenchanted, Israel naturally turned back to the Russians.  It’s widely reported in the Israeli media that Avigdor Lieberman, a former Soviet émigré, has facilitated much of the warming of the relationship with Russia, including this particular spy deal.  Those inside Israel most opposed to him and his Yisrael Beitenu party have regularly painted him as a Russian.  Haaretz has also reported the Mossad has refused to brief Lieberman on certain sensitive subjects which might offer Russia access to Israeli secrets.”

Although it is difficult to see, at this point, how Israel could stop feeding at that $4 billion teat for armaments the US provides every year, the possibility of a shift by Israel is intriguing. If it were to take place it could have a profound effect on not only US foreign policy becoming independent of its dedication to Israeli foreign policy, right or wrong, but could also affect our energy policies. With a greater influence of Russia in not only Israel but the Arab states it could force the US finally to take a more serious view of investment in alternative fuels.

4 thoughts on “Israel, Russia, and the USA”