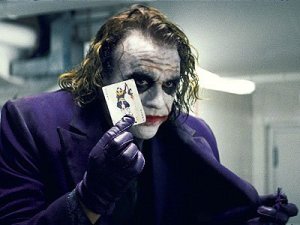 Beware of jokers in the deck

Who is the real aggressor in Ukraine?  The U.S. appears to be playing the democracy card again, this time to save Ukraine from big, bad Putin.  But is there a joker in the deck?  Is it possible that our President, our Vice President, and our eminent Secretary of State, emboldened by their claims of successful peace-making in the Middle East, have not told us the whole story about why we are now meddling in Europe?

Here’s an alternative view that highlights the importance of shale gas and fracking.

We are being told that we are just trying to bring a better life to the poor, benighted Ukrainians.  But the cards are much more to the liking of Chevron, ExxonMobil, and that entire fracking crew. If our polluting fossil fuel companies can develop shale gas in Ukraine, not only will it enrich them, but it will deny Russia a client for natural gas. Or even a worse scenario for Putin, Ukraine, powered by an explosive short-term release of natural gas from shale deposits, could become a net exporter of energy, competing with Russia, or even charging Gasprom a pipeline toll.

That scenario will tick some boxes for the Obama/Kerry crew, while making their Big Oil buddies salivate, but what about the ecological devastation they will leave behind?  The Ukrainians in the west of the country may rue the day they found themselves a pawn of energy oligarchs, East and West.

Now we see why we are ready to destabilize another part of the world that our drones or special forces haven’t already destabilized.

We don’t belong in Ukraine and our involvement can only provoke an explosive blow back that the shortsighted Obama -Kerry-military team cannot visualize in their blind desire to help the oil companies and weaken Russia. Whenever we see our government playing the democracy card, try looking under the card — chances are you will see an oil or gas stain.

Update (4/27/14): This article by Robert Parry, “John Kerry’s Sad Circle to Deceit,” contains a penetrating analysis of Kerry and Obama’s grand designs on Ukraine.  Parry concludes his article with these words:

Yet, what has gripped Official Washington and the U.S. news media is a full-blown “group think.” The facts and context of the Ukrainian events have been forgotten or bowdlerized to such an extent that the American people are being systematically misled. Whenever the fuller context is mentioned, it is dismissed as “the Russian narrative.”

We have seen this movie many times before – as has John Kerry – when the American people were snookered into the Vietnam War via the Gulf of Tonkin deception, when we were sold on Iraq’s non-existent WMD, and when we were told “facts” about the Syrian gas attack that have since proved false, just to name a few of the times propaganda has dominated American discourse around war or peace.

Sadly, John Kerry seems to be completing the circle of his public career by becoming as an old man what the young John Kerry bravely spoke against.”

2 thoughts on “The Real Aggressor in Ukraine”