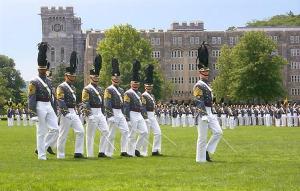 What will West Point graduates do without wars in Iraq and Afghanistan? Don’t worry! There are a lot more threats listed on the classroom chalkboard.

The New York Times this morning has an interesting article on this year’s West Point graduates.  With the end of the war in Iraq (at least for us) and the winding down of the Afghan conflict (again, at least for us), West Point graduates face the prospect of not being immediately deployed to a shooting war.  The article paints this as grim times, at least for the graduates, many of whom are seeking opportunities in the Special Forces for a better chance at earning “coveted” combat badges and patches.

And this is precisely the problem with a professional military that is self-defined as “warriors.”  Its members desire war: a chance, so they think, to test themselves in the crucible of combat.  They want to be where the action is, even if that action is ill-advised or even illegal under international law.

Two centuries ago, the model for West Point was a citizen-soldier engineering school, a band of brothers who would help tame our continent more through engineering skill than fighting prowess.  Our army, of course, has never been reluctant to fight when the cause was just (or when they were told by various leaders the cause was just), but the emphasis was on civilian needs first, notably the development of our nation’s infrastructure.

Contrast that with today.  The article in the New York Times includes a photo of a chalkboard used in a West Point class to explain today’s security environment.  The threats listed on the board include terrorism, cyber, Egypt, Syria, China, Iran, and North Korea (NK).  The Army’s priorities appear to be defense of the homeland (the HL), something about preserving order, and something about promoting our economic interests and values overseas.  Notably absent (as far as I can tell from the photo) was any explicit mention of the citizen-soldier ideal of supporting and defending our Constitution. 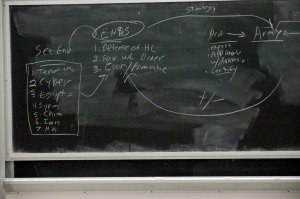 I wouldn’t want to make too much of a few words scribbled on a chalkboard.  But it appears from that list of “threats” that our West Point graduates will have plenty of opportunities in their military careers to march to the sound of gunfire.  And probably more than a few opportunities to add some “coveted” combat badges and patches to their uniforms.

They’ll be no lack, in short, of red badges of courage.  More’s the pity for ourselves and for our nation.

18 thoughts on “Fighting for Coveted Combat Badges and Patches”