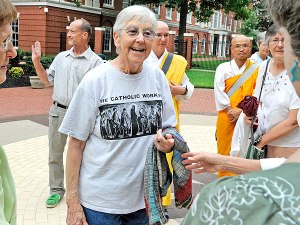 It was called mutually assured destruction, or MAD for short.  In the Cold War, the U.S. and the Soviet Union threatened each other with mass murder.  If the nuclear missiles had flown, perhaps 100 million souls would have been vaporized in thirty minutes.  Perhaps the human species (and most other species) would have been threatened with extinction due to nuclear winter.  Not exactly a “love your neighbor” policy, nor a “love God” policy, considering a nuclear war would have destroyed most of God’s creation.

As Michael Gallagher notes in his first article for The Contrary Perspective, the Catholic Church has been largely silent on the moral issue of nuclear war.  Dedicated anti-war activists like Sister Megan Rice are essentially dismissed as zealots and ignored by the hierarchy.  As witnesses to Christ’s two great commandments, Rice and her fellow protesters are just too dedicated to the cause of peace and justice and love.  Aren’t they?  We can’t have that in the Catholic Church, can we?  W.J. Astore

On February 18, a Federal Judge in Knoxville, Tennessee sentenced Megan Rice, an 84-year-old nun who served for forty years in West Africa, to a term of thirty-five months for her spectacular incursion into the Y-12 nuclear facility in Oak Ridge together with her fellow activists Michael Walli, 65, and Gregory Boertje-Obed, 58.  The equally culpable Walli and Boertje-Obed received longer sentences, five years each, mainly, it seems, because they weren’t venerable old nuns.

The enthusiastic world-wide support given the extraordinary trio failed to include so much as an absent-minded pat on the head from the American Catholic hierarchy.  Nor did they get much more attention from the liberal Catholic media—Commonweal, the Jesuit Magazine America and the National Catholic Reporter—perhaps because nothing makes a liberal quite as uncomfortable as a radical.

The secular media gave them somewhat more attention.  The New York Times, those wonderful folks who helped bring us the Iraq War, got so carried away by the sheer drama of three elderly Catholic radicals armed with wire cutters trudging three miles through a forbidden area to desecrate the holy of holies of America’s nuclear might with peace graffiti, ran a picture of Sr. Megan on the front page, a display that probably spoiled the breakfast of a comfortable churchmen like Cardinal Dolan of New York.

But then the Times, a senior member, after all, of what ex-CIA man-turned activist Ray McGovern terms the FCM (the Fawning Corporate Media), came to its senses, and there was no significant follow-up.  Journalists from The Guardian and Al Jazeera, on the other hand, interviewed the culprits in prison, and Mother Jones did a feature article on them.  And then, for good measure, People magazine—yes, People magazine!—ran a story on their sentencing.

The moral obtuseness of the Catholic hierarchy runs deep.  Fr. John McKenzie, S.J. the eminent biblical scholar had an irreverent sense of humor.  In his classes at my seminary he referred to the aptly named Bathsheba’s rooftop ablutions as history’s most famous bath.  Then more seriously, but with a satirical sting, he wrote in The Civilization of Christianity that reasonably intelligent Catholics realize in their heart of hearts that the Mennonites have gotten Jesus right, but if the Church dared to give a like witness, the harmonious and mutually advantageous relationship between the Church and the American government, for example, would come to a crashing halt.

It did, in fact, give signs of doing just that a generation ago when the America bishops shook up the Reagan administration and the Pentagon with the first draft of their peace pastoral The Challenge of Peace.  Harmony was swiftly restored, however, when the bishops, under pressure from John Paul II, came out with two denatured subsequent drafts and, after a bit of the usual pious boilerplate concluded not with a bang but a whimper: they declared the nuclear standoff morally acceptable, not as a permanent state, but as a stage towards nuclear disarmament.

That was more than three decades ago.  To be fair, there have some steps since then, but baby steps, always allowing each of the warhead-packing negotiators to keep enough stuff on hand to destroy life on the planet two or three times over instead of five or six or whatever.

The American Church Hierarchy, like their brother bishops abroad, have never, ever declared a war fought by their country to be unjust.  Hence their reluctance to bring up the distressing subject of war lest they endanger their invincible ignorance—the kind that removes all guilt—by inadvertently learning too much and thus being forced to act morally or—as we used to say–commit a grievous sin.   And Plowshare activists like Megan, Michael, and Greg annoy the hell out of them by calling attention to our nation’s tireless preparations for nuclear Armageddon.

Bishops are supposed to be instructors of their dioceses in matters of faith and morals, and with instructors like this—hirelings rather than true shepherds—is it any wonder that Catholics—though aware in varying degrees that war is not good—don’t see the moral dimensions of a particular war as being any of their concern?

Pope Francis gave a homily recently in which he said that war was a bad thing, which was nice, especially since this was the first time that I recall his saying it. On the eve of the invasion of Iraq, his predecessor, John Paul II, lamented that “War is a defeat for mankind,” but he didn’t mention any war in particular though the United States of America, a Christian nation as many in our Congress and state legislatures vehemently insist, was about to launch a war that violated each and every condition needed to qualify as a just war and which, among a host of other evils, would decimate the Catholic community of Baghdad, which was quite older, by the way, than the dioceses of New York and Chicago. Pius XII also decried war, frequently, but like Francis and John Paul II, he never specified which war he was referring to though an eminently decryable one was raging all around him.

His successor, on the other hand, Paul VI, a mild-mannered man not noted for his decisiveness (“How’s your Hamlet doing up doing up there in Milan?” the jovial John XXIII once asked a Milanese priest) came out with a cri de coeur rather than a prepared statement when he visited Hiroshima and called the nuclear massacre perpetrated there, “a butchery of unprecedented immensity,” a declaration—and by implication an accusation—that set the teeth of many a patriotic American bishop on edge.

Unfortunately Paul VI’s Japanese itinerary didn’t include Nagasaki, the historical center of Japanese Christianity.  There the “second bomb”—dropped by a B-29 piloted by Major Chuck Sweeney and one of whose crewman was named Gallagher—had a plutonium core that made it much more powerful than the Hiroshima bomb. The reason Nagasaki’s death toll did not surpass Hiroshima’s was that it missed its target point, the center of the city, and burst directly over Urakami, the most Catholic section of Nagasaki,  destroying the cathedral and, among its other victims, wiping out three congregations of nuns.

There was no comment on either atomic bombing by any Catholic bishop anywhere in the world, including the Bishop of Rome, over such heinous violations of the Just War theory, which condemns assaults on the civilian population—just as there had been none before that about the area bombing of Europe by the Royal Air Force and the fire bomb massacres committed by the American Air Force in Japan.  (The latter raids, it’s worth mentioning, were led by Curtis LeMay, the recipient of an honorary degree from a Jesuit school as, more recently, was John Brennan—my alma mater, John Carroll in the first instance, Fordham in the second.  And, oh yes, both degrees were in humanities.)

Ask the average American Catholic what are the issues facing the Church, and odds are that he or she will come up with the usual suspects—abortion, contraception, married priests, women priests, gay marriage, the admission of divorced and remarried Catholics to the sacraments, a decline in church attendance, and so on.   Some few with a broader vision might mention the clerical sexual abuse crisis, which despite all assurances from on high, is still far from resolved.

I don’t deny that these are significant matters, but war and the threat of nuclear annihilation especially are still more urgent and of greater moral consequences.  By confronting them, furthermore, the Church would regain a measure of the moral credibility that it squandered in rushing to consult its lawyers rather than the Holy Spirit when the clerical sexual abuse crisis arose.

An English lay theologian, a friend of mind, asked in a recent e-mail when I was going to warm up to Pope Francis, and I answered that I would once he commended Megan, Michael, and Greg in his next homily on war and chastised the American hierarchy for ignoring the Christian witness they embodied in condemning evil incarnate.

Michael Gallagher, a coeval of Sr. Megan and a former Jesuit seminarian, served as a paratrooper during the Korean War.  His book on Catholic activists, The Laws of Heaven, won the National Jesuit Book Award in theology in 1992, and his translation of Yukio Mishima’s Spring Snow was a finalist for the National Book Award in translation in 1972.

9 thoughts on “A Moral Blind Spot: The Catholic Establishment and the Y-12 Nuclear Protest”