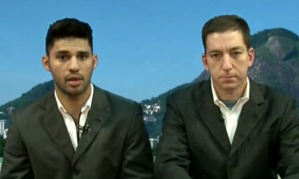 Breaking News.  This one is hard to believe: A Brazilian traveler, David Miranda, transiting London’s Heathrow Airport from a European flight to catch his flight to Rio de Janeiro is accused of “terrorism” because he has encrypted data related to Edward Snowden on his computer. In my opinion this is the opening gun from the Obama administration to “get” Glenn Greenwald, one of the chief reporters working with Snowden. In my humble opinion Her Majesty’s government would not have taken this step without the full participation of the Obama administration.  If there is no big outcry, I predict the U.S. government will shortly try to indict Greenwald himself as a “terrorist.”

This is a major attack on free speech, a free press, and free news gathering and shows the extent to which this administration will go to suppress any questioning of their illegal spying activities.  An interesting blowback could develop though since Miranda (Greenwald’s partner) is a Brazilian citizen and the President of Brazil is one of the world leaders who, like Angela Merkel of Germany, is mad as hell at the U.S. for spying on them personally.  She just may make this a cause célèbre in South America and throughout the world. She would have plenty of company.

Journalism is now “terrorism” and peace-feelers end in assassination.  Such is the sordid reality of the actions approved by our Nobel Peace Prize-winning President.

5 thoughts on “Journalism As “Terrorism”: Would the British Government Do This Without Obama’s Approval?”