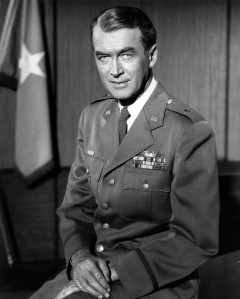 The tradition of the citizen-soldier is still alive in this country — just look at our National Guard units. But the burden of military service is obviously not equally shared, with the affluent and famous tucked away safely at home. How many people remember that Jimmy Stewart, legendary Hollywood actor, flew dangerous combat missions in the skies over Europe during World War II? Stewart didn’t flaunt his combat service; in fact, playing against type, he stayed home as the unhallowed George Bailey in It’s A Wonderful Life, a movie that celebrated the heroism of the ordinary citizen. In the movie, Stewart’s quiet, home-based heroism, his powerful sense of fairness and decency, is even allowed to overshadow that of his younger brother, who returns from war with the Medal of Honor.

There’s an interesting lesson there. In World War II, celebrities often risked life and limb in real military service, then after the war played against type to celebrate the virtues of a homespun heroism. Today’s celebrities avoid military service altogether but play tough in action films where they pose as “heroes.”

Other than Pat Tillman, who gave up a promising NFL football career to join the military after 9/11, I can’t think of a single celebrity who answered the call to arms as a citizen-soldier.

Then again, that call was never issued. After 9/11, President George W. Bush famously told us to keep calm and carry on — carrying on shopping and patronizing Disney, that is. He did so because he already had a large standing professional military he could call on, drawn primarily from the middling orders of society. This “all volunteer military” is often described (especially in advertisements by defense contractors) as a collection of “warfighters” and “warriors.” In the field, they are supplemented by privatized militaries provided by companies like Academi (formerly Blackwater/Xe), Triple Canopy, and DynCorp International. In a word, mercenaries. These bring with them a corporate, for-profit, mindset to America’s wars.

If we as a country are going to keep fighting wars, we need a military drawn from the people. All the people. As a start, we need to draft young men (and women) from Hollywood, from the stage and screen. And we need to draft America’s sports stars (I shouldn’t think this would be an issue, since there are so many patriotic displays in favor of the troops at NFL stadiums and MLB parks).

Jimmy Stewart served in combat. So too did Ted Williams. So too did so many of their Hollywood and sporting generation.

Until today’s stars of stage and screen and sports join with the same sense of urgency as their counterparts of “The Greatest Generation,” I’ll remain deeply skeptical of all those Hollywood and sporting world patriotic displays of troop support.

If this whole line of argument sounds crazy to you, I have a modest suggestion. Rather a plea. If our celebrities who profit the most from America are unwilling to defend it the way Stewart and Williams did, perhaps that’s not just a sign of societal rot. Perhaps it’s a sign that our wars are simply not vital to us. And if that’s the case, shouldn’t we end them? Now?

Astore writes regularly for TomDispatch.com and The Contrary Perspective and can be reached at wjastore@gmail.com.

5 thoughts on “Uncle Sam Wants You, Stars of Stage and Screen and the Sporting World”