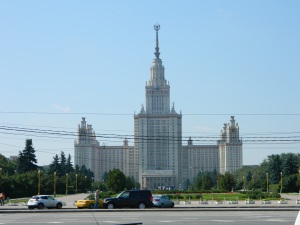 I have just returned from nearly two weeks in Moscow, my first visit to Russia. Just from the sights I absorbed on the ride from the airport to downtown, I appreciated that Russia is a great nation and justly deserves to be recognized as such by the U.S. and other hostile governments.

This city, said to be home to about 12 million people, is an incredible mix of the old and the new. Renovation of older buildings and construction of new was going on all over town. The world famous Metro (subway) system is everything that’s claimed for it: massive, clean stations, trains remarkably frequent and fast-moving. Far more efficient than New York City’s system, at a cost of less than one U.S. dollar per fare. The streets are also far cleaner than those of American metropolises–each morning, you will see workers sweeping and hosing them down. Many people apparently are still employed by different levels of government, more than 20 years after “socialism” was officially discarded in favor of “Wild West” capitalism.

Perhaps you’ve heard of the “horror” of Soviet architecture? Bollocks, I say! Stalin’s “Seven Sisters,” office and housing complexes of monumental proportions–still sporting red stars at their peaks–impressed me greatly. They were built with the people’s resources to represent the imposing power of the people’s will. The growth of an elite caste which siphoned off disproportionate chunks of society’s riches resulted from a human flaw, not the fault of socialism as a theoretical approach to societal governance.

I was absolutely stunned by the beauty of many of the women I saw bustling about in their everyday activities. I encountered many beautiful children, and many of the young men have finely chiseled features. I cannot conceive of there being a capital of any other nation with more beautiful people than I encountered in Moscow. I was surprised, actually, at the very public display of affection I observed, primarily among the young, but older couples were necking as they rode the very long escalators into/out of the Metro.

This appears to be a young society on the whole, or perhaps it is Moscow that draws in the young. These are the children of the children of the Soviet citizens who lived under the constant threat of nuclear annihilation during the Cold War. I couldn’t help but reflect on those days when “my” government was firmly committed, in principle at least, to deploying those weapons, and certain elements within that government were positively champing at the bit to pull the trigger.  (Of course, the Soviet Union was also committed to this MAD dance, as in Mutually Assured Destruction.)

There is much one may criticize, human rights-wise, in the policies of today’s Russia. But as a citizen of a nation which just sentenced a young soldier to 35 years in prison for blowing the whistle on criminal U.S. military activity, and sends murderous drones to kill citizens of other nations that it claims are “terrorists,” I don’t feel like being the first to cast a stone toward the great nation I just returned from.

5 thoughts on “Reflections on a Visit to Moscow”