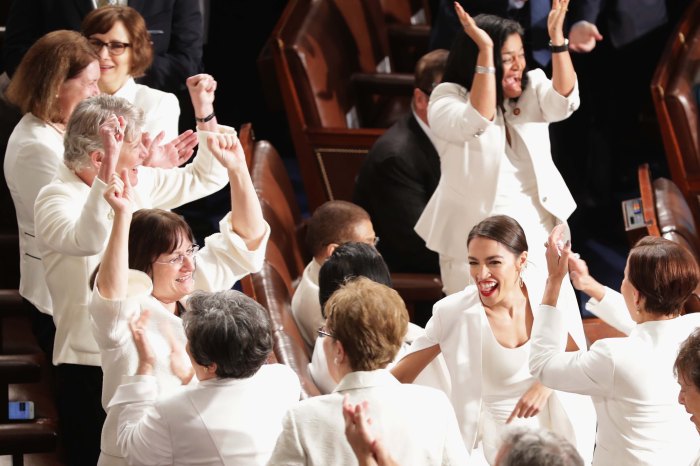 WASHINGTON, DC – FEBRUARY 05: Female lawmakers cheer during President Donald Trump’s State of the Union address in the chamber of the U.S. House of Representatives at the U.S. Capitol Building on February 5, 2019 in Washington, DC. A group of female Democratic lawmakers chose to wear white to the speech in solidarity with women and a nod to the suffragette movement. (Photo by Chip Somodevilla/Getty Images)

Donald Trump presented his second State of the Union speech tonight and it was a phantasmagoria of Trumpian grandeur, and not in a good way.  For future generations, it should be used as a model for what not to do when preparing and delivering such an address.  It was significant both for what it included and what it excluded, among which were climate change, #MeToo, racism, or social justice.  If you were a space alien coming to earth for the first time you’d think there were only two critical issues facing America: immigration and border security.  As far as Trump was concerned, there were no other issues.  Sure he made nods to the economy, anti-Semitism, and the pro-life movement.  But they were tips of the hat and not substantive discussions.  As for foreign policy, you’d hardly know we had one.  All references to this subject were reserved for the end of a hellishly long, 5,000 word, speech.

One of the strangest lines in the entire speech attempts to pre-empt the looming avalanche of federal and state investigations against Trump himself, his real estate company, his foundation, and his family:

“If there is going to be peace and legislation, there cannot be war and investigation. It just doesn’t work that way.”

As always, it’s a bit hard to parse what he meant.  But I take it that he’s priding himself on bringing American boys home from war, and leading what he sees as ongoing march toward American prosperity.  Thus, all of his economic policies and legislative initiatives (such as they are) are the record he stands on.  While the Democrats, in his view, represent war, that is American troops stuck in quagmires like Iraq, Afghanistan and Syria.  Alongside these “Democrat wars,” as Republicans call them, there is the intent of the new Democratically-controlled House of Representatives to investigate the hell out of Trump.

Beyond the lunacy of Trump’s formulation, there is the odd juxtaposition of legislation and investigation.  It’s as if he’s saying that Congress is mandated to legislate, but not to investigate; which, of course, is a fundamental misunderstanding of the role of Congress as one of the three branches of government.  It is the legislature which is empowered to investigate misdeeds and call out officials of the judicial and executive branch for corruption or malfeasance.  There is no way to separate the act of passing laws and investigating wrongdoing.

Trump also took a swing at Bernie Sanders and the progressive insurgency in the Democratic Party, which played a major role in the Blue Wave of the 2018 Congressional elections.  He called out “socialism” by name as if it were a dreaded scourge:

Here, in the United States, we are alarmed by new calls to adopt socialism in our country. America was founded on liberty and independence — not government coercion, domination, and control. We are born free, and we will stay free. Tonight, we renew our resolve that America will never be a socialist country.

As he said this, the TV camera panned, showing the scowling face of Sanders, who looked like steam was pouring from his ears.  In a sense, this is an early preview of the 2020 election campaign, in which Sanders promises to be one of the strongest candidates.

Another irony of the attack on socialism is that the entire Trump real estate enterprise was founded on government programs and benefits.  After World War II, Fred Trump built his empire of building housing for returning GIs and their growing families.  Such housing was heavily subsidized by the federal government and builders earned generous tax credits for projects.  Without the government’s hand encouraging such development Trump would not have built his fortune and America’s returning GIs would never have found the needed housing for their families.  Trump’s son seems to have conveniently forgotten this.

Trump, known as a serial philanderer who’s been accused of serial counts of sexual assault, had to give a sop to women in his speech. So he boasted of how many women are taking the hundreds of thousands of new jobs he’s claiming to have created:

No one has benefited more from our thriving economy than women, who have filled 58 percent of the new jobs created in the last year. All Americans can be proud that we have more women in the workforce than ever before…

But he didn’t bargain for the fact that the white-clad (in tribute to the suffragettes) new female members of the House would jump to their feet, raising their arms high in the air and celebrating as if they’d just won a heavyweight prize-fight.  They were laying claim to Trump’s self-praise and taunting him with it by saying: “we are the women who’ve taken these new jobs here in this House; and we plan to make your life miserable.”

Lawmakers in New York cheered with delight upon the passage of legislation that would allow a baby to be ripped from the mother’s womb moments before birth. These are living, feeling, beautiful babies who will never get the chance to share their love and dreams with the world. And then, we had the case of the Governor of Virginia where he basically stated he would execute a baby after birth.

The idea that any abortion law would permit a doctor to rip a baby from its mother’s womb “moments before birth” is not only grotesque, but an out and out lie.  The notion that support for late-term abortions is equivalent to “execution” is ridiculous.  Further, a late term abortion would happen before birth, not after.  Trump, enjoyed his fair share of sex both licit and illicit, apparently knows quite a lot less about child-birth.

Trump only mentioned Iran twice.  But the passages dedicated to Iran were deeply inflammatory:

To ensure this corrupt dictatorship never acquires nuclear weapons, I withdrew the United States from the disastrous Iran nuclear deal. And last fall, we put in place the toughest sanctions ever imposed on a country.

We will not avert our eyes from a regime that chants death to America and threatens genocide against the Jewish people. We must never ignore the vile poison of anti-Semitism, or those who spread its venomous creed. With one voice, we must confront this hatred anywhere and everywhere it occurs.

Ironically, the JCPOA which he’s boasting about abandoning was designed to delay or eliminate the development of an Iranian nuclear weapon.  Without the agreement, it’s entirely possible that Iran too will renounce it and resume a nuclear program it suspended in 2003, according to U.S. intelligence estimates.  That could lead to an Iranian nuclear weapons capability far earlier than the JCPOA would have permitted.

There is one flagrant lie in the above passage. It is a calumny to claim Iran has threatened genocide against the Jewish people.   It has never done that.  Nor has it even threatened genocide against Israel.  What it has done is warned Israel that it would defend itself in the event it was attacked.  Even harsh statements by Ayatollah Khomeini concerning Israel never directly threatened that Iran would attack Israel.

It was despicable of Trump to invite a survivor of the Tree of Life massacre as his guest at the speech.  Trump took days after the tragedy before he made any statement about it.  He never went to Pittsburgh to mourn with the victims, nor was he invited to do so.  Welcoming the survivor and shining a spotlight on this man was the worst sort of cynicism.  It may fool Sheldon Adelson and the Jewish corporate fatcats of the Republican Jewish Coalition. But it will not fool the overwhelming majority of American Jews, who no doubt felt slightly sick to their stomachs when he did that tonight.