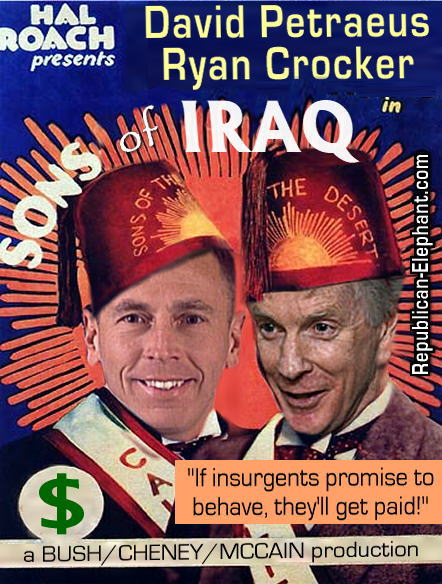 Peter Van Buren, who had a ‘catbird’ seat’ as a State Department leader of an FOB (forward operating base) during the Iraq war, shares his analysis of the torturous road American foreign policy took to finally hand over control of Iraq to Iran-friendly Shiite politicians. Along the way they succeeded in helping to create ISIS with their mixed policies in regard to the Sunni minority in the country.  Remember GWB’s childish claim of “mission accomplished” as our policies of “de-Bathification” threw Sunnis out of jobs and governance, willy-nilly, leaving Sunni’s in the military ripe for ISIS leadership.

Iraq should be a lesson to us that our political leadership has the weaponry to successfully engineer “regime change” anywhere in the world, but they lack the political savvy to do it without awful consequences. Let’s try peaceful diplomacy for a change. – b. traven

The contours of Iraq post-Islamic State are becoming clearer. Did the strategy to defeat Islamic State succeed? Are the American wars in Iraq finally over? Who walks away the winner?

Iraqi Prime Minister Haider al-Abadi declared victory over Islamic State on December 9, 2017. And while there will still be some fighting, the real war is over. Yet there were no parades, no statues pulled down, no “Mission Accomplished” moments. An event that might have once set front pages atwitter a few years ago in America wasn’t even worth a presidential tweet.

That’s because in Washington there is little to celebrate. With the likelihood of spring elections in Iraq, what stands out is how absent American influence is. The two main candidates are current prime minister Abadi, and former prime minister Nouri al-Maliki. Both come from the same Shi’ite Dawa party, and both have close ties to Iran. The names should be familiar. Maliki was the Great American Hope in 2006, and again in 2010, to unite Iraq across Sunni-Shi’ite-Kurdish lines as the bulk of American occupation forces withdrew, while Abadi was the Great American Hope in 2014 to do the same as American troops flowed back to Iraq to fight Islamic State.

As prime minister Maliki didn’t follow-through on the Surge in the end years of the American occupation, leaving the Sunnis at the mercy of his Shi’ite supporters. Maliki’s first action post-occupation — the very day after the last American combat troops withdrew — was to try and arrest his own Sunni vice president. In 2014, Maliki unleashed his army in Sunni Anbar Province, a move which drew Islamic State in to Iraq. American manipulations then replaced Maliki with Abadi in 2014.

Yet despite high (American) hopes, Abadi made few efforts to integrate Sunnis into the Shi’ite-dominated Iraqi judiciary, military, and police forces, the minimum groundwork for a united Iraq. He did not create economic opportunities for Sunnis or deliver public services. Instead, Abadi created new fault lines, ossified old ones by further embracing Tehran, and sent Iranian-lead Shi’ite militias numbering some 120,000 tearing through the Sunni heartlands. Both Presidents Obama and Trump worked closely with Abadi to ultimately destroy Islamic State in Iraq, at the expense of the Iraqi Sunnis.

The Obama-Trump strategy was medieval: kill people until there was literally no Islamic State left inside Iraq, then allow the Iranians and Shi’ite Iraqis to do whatever they pleased with the Sunnis in the aftermath. This was the big takeaway from the Iraq war of 2003-2011: there would be no political follow-on this round, no nation building, between the end of the fighting and the exit. The United States would pay no mind to internal Iraqi politics, even if that meant an exclusionary Shi’ite government in Baghdad under Tehran’s wing.

The walk-away policy was implemented, albeit less violently, to resolve for now the question of the Kurds. In September 2017, the Kurds voted for independence from Iraq, only to see their fate decided as Washington stood aside while Shi’ite militias pushed Kurdish forces from disputed regions, including the oil-rich city of Kirkuk. After decades of American promises of independence, the Kurds were left to salvage a small bit of pre-2003 autonomy from Baghdad where once full statehood stood within grasp. With American support, the Kurds blunted Islamic State in the darkest days of 2014. In 2018, in what some analysts call the “Twilight of the Kurds,” they no longer seem to have a place in Washington’s foreign policy.

The American strategy against Islamic State worked. It should have; this was a war the American military knew how to fight, with none of that tricky counterinsurgency stuff. Retaking Ramadi, Fallujah, and Mosul were set-piece battles. City after Sunni city were ground into little Dresdens (since 2014, the United States spent more than $14 billion on its air campaign against Islamic State) before being turned over to the militias for ethnic cleansing of renegade Sunnis. The United Nations was appalled by the mass execution of Sunni prisoners and called for an immediate halt. There was no response from Washington.

Unlike the 2003-2011 war, when it spent $60 billion on the task, the United States does not intend on trying to pay for the reconstruction of Iraq. Estimates suggest $100 billion is needed to rebuild the mostly Sunni areas destroyed, and to deal with the 2.78 million internally displaced Sunnis. Shi’ite Baghdad pleads lack of funds to help. Across two administrations Washington contributed only $265 million to reconstruction since 2014 (by comparison, America allotted $150 million in 2017 alone to financing arms sales to Iraq, one of the top ten global buyers of American weapons.) Other than plans for Kuwait to host a donors conference in February, the Sunnis are largely on their own, hanging on with the vitality of an abused shelter dog.

President Trump is unlikely to pull troops out of Iraq entirely. A reduced force will stay to play Whack-a-Mole with any Islamic State resurgence, to act as a rear-guard against the political fallout that chased Obama in 2011 when he withdrew troops, and to referee among the disparate groups in western Iraq and Syria the United States armed willy-nilly to help defeat Islamic State. The armed groups mostly set aside differences dating from Biblical times to fight Islamic State, but with that behind them, about all they have in common is mutual distrust and lots of guns. American troops perma-stationed inside Iranian-allied Iraq are a bit of a geopolitical oddity, but one Iran has likely already at least passively agreed to. Tehran has little to gain from a fight over some American desert base real estate right now, when their prize is the rest of Iraq.

Over five administrations and 26 years, the United States paid a high price – some 4,500 American dead and trillions of taxpayer dollars spent – for what will have to pass as a conclusion. Washington’s influence in Baghdad is limited and relations with Iran are in shambles under a Trump administration still focused backwards on the Obama-era Iran nuclear accords. The last quarter century of Iraq wars thrust the region into chaos while progressively erasing American dominance. Iran is picking up the pieces, creating a new Lebanon out of the shell of what was once Iraq. As long as the Trump administration insists on not opening diplomatic relations with Tehran, it will have few ways to exert influence. Other nations in the Middle East will diversify their international relationships (think Russia and China) knowing this.

A long fall from the heady days of 2003, when America lit up the region like the Fourth of July to remake the Middle East. But the problems proved impossible to solve and so America washed its hands of that, for this. And if any of this does presage some future American conflict with an Iran that has gotten “too powerful,” then we shall have witnessed a true ironic tragedy.

One thought on “Iraq: The Twisted Road to American Irrelevance”