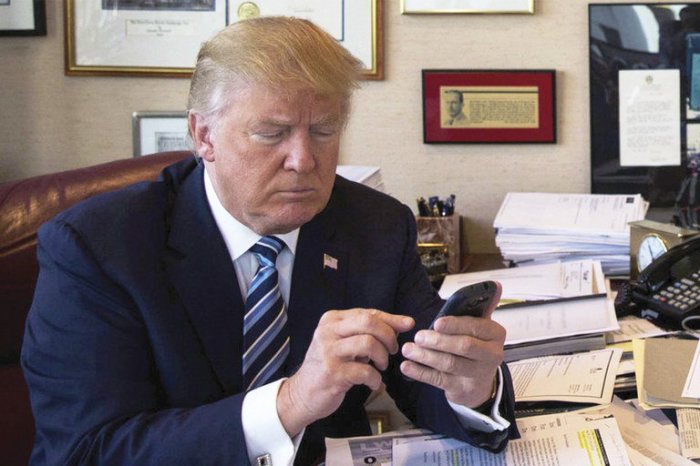 Something clearly has changed.  It has been twenty-five years since Ross Perot’s insurgent presidential campaign came crashing down to earth.  You could say it is unfair to compare Perot’s candidacy to Trump’s.  After all, unlike Trump, Perot really had been in charge of some successful corporations, not merely real-estate Ponzi schemes.  You may not have liked them, but he also had real policy proposals… and a history of participation in public affairs, something entirely missing from Trump’s resume.

So why did Perot stumble where Trump soared?  Something pretty big must have happened in the intervening quarter century to give Trump the edge he needed, and to do it not as an outsider, but within the confines of the Republican Party itself.

According to Washington Post columnist David Von Drehle, the change that enabled Trump to, well, trump all his opponents, is something no less establishment-shattering than was the invention of the printing press.  In a piece cheekily titled, “Steve Jobs gave us Donald Trump,” Von Drehle traces the communication revolution that followed the introduction of the first iPhone in 2007.

Like Guttenberg’s hot-type presses which allowed the mass production of words, wresting control over the Good Word from cloistered monks, the iPhone and other smartphones opened the door to direct communication from a single individual to as many people as will listen.  And millions are paying attention to every word that Trump taps into his phone.

When Barack Obama first arrived at the White House, he had the same opportunity as Trump. He was said to be “addicted” to his Blackberry.  But after a tussle with the bureaucracy, he gave it up, or at least allowed himself to be emasculated, relinquishing his phone.  Not so, Donald Trump.  He said, “I’m President and I’m making the rules here – I’ll tweet what I like and when I like.”

Von Drehle’s point, however, is not that Trump has smashed precedent, but that his insistence on communicating directly to millions signals an end to established political order.  The smartphone “is vaporizing” the functions of the political parties:

A well-run party controls the connection between a candidate and a line on the ballot. It controls access to key donors, who can open the gateway to television, the great persuader. Through these and other linkages, the party mediates the most important connection of all, between the candidate and the voters.

With those functions gone, the future of established political organization is in serious doubt.  Where the door of establishment media and parties was closed against Ross Perot, preventing him from reaching people, Donald Trump had the good fortune to have a smartphone in his hand that let him send signals directly to you and me…  He wont be the last one to do it.

44 thoughts on “Donald Trump has Me on Speed Dial”