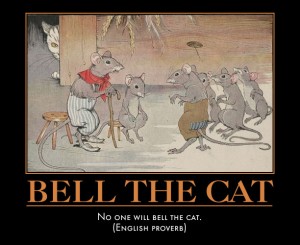 Bell the Cat, America! Before it’s too late

We at The Contrary Perspective believe in freewheeling debate.  We recently had such a debate, largely behind the scenes, on the causes and larger meaning of America’s invasion of Iraq in 2003.  We offer this debate to our readers, unedited except for the addition of links and clarifications, and urge you to participate in the comments section.

The debate begins with traven asking Astore about the “first causes” of the Iraq War and U.S. meddling in the Middle East.

traven: Try this on for size. Aristotle looks for “first causes.”  Does the first cause for our failures lie in the blind and short term vision of our leadership (as your article at TomDispatch tends to  imply) or does it lie in our leadership’s dependence on Saudi oil and the illusion of Israel and Saudi Arabia* as the sources of stability in the Middle East? In my opinion this should be the focus of any analysis of our Middle East policies.

* The Saudi’s Wahhabism and money combined with Israel’s paranoia and expansionism into Palestinian lands are the cause. Our misplaced blind support of both, for a number of baseless reasons, is the “first cause” for our feckless policies.

Again, consider your comment (from your TomDispatch article) that:

“What arose in the minds of the Bush administration’s top officials instead was vengeance via a full-scale, global, and generational “war on terror.”

I disagree.  What arose in the minds of the neo-conservative cabal was not “vengeance” (vengeance was just propaganda to appeal to the baser instincts of the American people) but rather AN OPPORTUNITY.

Aha!  Here is our chance to gain control over Iraq’s oil.  See Paul O’Neill’s comments on how this issue came up at his first cabinet meeting as Secretary of the Treasury, before 9/11, which astounded him.  Along with control of Iraq’s oil was the goal of thwarting efforts by Russia or China to build a pipeline from the East Caucasus to the Indian Ocean via Pakistan, hence our intervention in Afghanistan and its environs.

Once the U.S. stopped that option the Middle East became even more important to neo con plans for world domination.

Astore: I think Bush/Cheney and Crew did want vengeance.  They had been humiliated by 9/11 (“defense” and foreign policy was supposed to be their strong suit).  Bush also wanted vengeance against Saddam for targeting his father.  In the immediate aftermath of 9/11, Bush looked weak.  On that morning, he was reading a “goat” story to kids.  He initially referred to the terrorists as “folks.”  He even seemed to disappear as Cheney ran from jet to shelter, posturing that he was in charge.  He and his handlers knew that Bush needed to assert himself, to become a “war president.”  And so they turned him into one.

Bush/Cheney and Crew also saw opportunity: they wanted to strike at Iraq.  Unsettled business from Desert Storm, plus, as you say, oil and Israel.

That’s why the invasion of Iraq was over-determined.  Short of a total surrender by Saddam, it was going to happen no matter what.  Bush needed a “great” victory to rehabilitate his image, hence the “Top Gun” moment on that aircraft carrier with the “Mission Accomplished” banner.  And knocking off Iraq obviously pleased Israel and the Saudis, at least initially, while creating opportunities for various corporate cronies.

It’s all connected.  Not one reason, but many.

Stuart Lyle:  I disagree – I don’t think the Bush crew cared one whit about “vengeance.” You are just attributing simple human emotions to complex and power-hungry monsters.  I buy the idea that “W” Bush wanted to avenge daddy even less.  He never showed much respect for the elder and I can’t see him invading a country for him.  The basics are clear.  They were waiting for an opportunity to unleash the military on whoever had the temerity to stand up in the way of their misguided global ambitions.  9/11 was the opportunity and they drove their Humvees through it.

Astore: Perhaps so, Lyle.  But why Iraq?  After all, Iraq didn’t attack us on 9/11.  And was Iraq really standing in the way of Bush/Cheney and Crew’s global ambitions?

They had to be seen as striking back against al-Qaeda, hence the attacks on Afghanistan.  Iraq was more complicated.  Oil, yes.  But also a settling of accounts with Saddam.  Unfinished business. Vengeance.  Whatever you want to call it.  It wasn’t just about oil.  If you want oil, you could strike the Saudis.  Venezuela.  Nigeria.

Iraq was about sending a message — as Henry Kissinger said, in the aftermath of 9/11, Afghanistan wasn’t enough.  Bush/Cheney had to bash a bigger target, and Iraq for so many reasons was the best option: Islamic, oil, history of using WMD, hated by the Saudis and the Israelis, and a “known” enemy that Bush/Cheney calculated would be easy to topple.  And so it proved: easy to topple, now impossible to rule.

I’m arguing that a confluence of factors made the invasion of Iraq in 2003 inevitable when you consider the mindset of Bush/Cheney.  Oil — yes.  Saudi and Israeli influence — yes.  Sending a message, especially to the Islamic world — yes.  Rehabilitating Bush’s image — yes.  Vengeance — yes, I’d say so.  Look at Bush’s keeping of Saddam’s pistol as a trophy.  The deck of cards he kept of Saddam’s henchmen.  His “wanted — dead or alive” posturing.  Immature machismo defined “W” Bush.  And what do macho men do when they’re embarrassed by those they consider to be inferior?  They seek vengeance.

I wouldn’t underestimate the personal in politics.  LBJ didn’t want to be the first president to “lose” a war, so he persisted in folly.  A wiser man, a more confident one, may have had the force of will to walk away in 1964.

Lyle:  OK, you are pouring everything in as a “reason,” but that just avoids taking a stronger stand.  Why Iraq?  Primarily because it was, in their opinion and based on their very rudimentary understanding of the world, a “soft” target.  They figured they could get away with it easily, without suffering a Vietnamization of the conflict.  And I can easily envision them counting on their greedy little fingers the collateral benefits, as you mentioned, please the Saudis and Israelis, scare the Iranians, intimidate the Russians, maybe even the Chinese (!), and make their oil buddies very happy.  And it would even make a nice story line that junior was avenging wrongs done to his pa.  But I believe none of those were the primary goals.

Remember, these are the idiots who believe in “an American Century,” the 21st Century, that is, not the 20th.  Part of that nutty vision was a “permanent” Republican majority.  What better way to cement their superior standing than to show that they could bust up some bad guys around the world in a way the sissy Democrats never could.  Afghanistan was a failed state to begin with, so blasting the Taliban back to the stone age, when they only existed in about the 8th century wasn’t going to impress anyone.  So why not tilt the artillery a little to the left and blast Saddam.  It’ll be a cakewalk and there will be icing to go around for everyone.  And, the true idiots that they are, they believed – and still believe – that any blowback would only help them.  And, given the sad state of the American electorate, I think they are probably right.  The desert jihadist criminals and the American elite criminals thrive off one another.

traven (reply to Astore): You haven’t yet addressed my reference to Paul O’Neill and his experience as Bush’s first Secy of the Treasury. O’Neill had been the CEO of ALCOA and he was very specific in relating that, much to his surprise and astonishment,* the neo con group of fellow cabinet members with Cheney in their very first meeting weren’t interested in domestic economic matters at all. The entire meeting was spent discussing how they were going to distribute Iraq’s oil. This meeting took place months before 9/11.

That meeting had absolutely no vengeance but showed a mindset looking for OPPORTUNITY.  9/11 was that opportunity to be seized upon. Bush was always a minor player.  And I am sure Cheney saw and managed that since Bush was still immersed in “My Pet Goat.”

The neo cons just trotted Bush out to make his ridiculous claims of being the “decider” look plausible when in actuality he was a pathetic player.

Many years ago I ran into a fellow who was in the same fraternity at Yale as “W” Bush and said he was a real wimp and the football team’s “cheerleader.”

*O’Neill resigned early, either under pressure because he wasn’t an ideologue, or because he didn’t want to be associated with that crowd.  Maybe both.

Astore: Maybe so, traven.  In some ways Cheney was the real “decider”; indeed, he chose himself to be Bush’s VP.  Remember that?  “W” put together a committee headed by Cheney to search for a VP, and Cheney found himself!

Like I said, I agree that Bush/Cheney and Crew wanted to knock over Iraq.  I just think there were many reasons that combined to make it a certainty.

traven: Bill, I am sure you are familiar with the neo con policy paper  called Project for the New American Century. This policy paper written with all of the pro-Israeli Jews like Paul Wolfowitz, and right wing Wasps like Cheney outlined years before they took power how the US should and could rule the world. The Bush administration merely took advantage of 9/11 to put that program in place. It was already at the top of the agenda at that first cabinet meeting that O’Neill attended and went into effect, under Cheney’s command in response to 9/11. To my mind it also raises to a higher level the possibility of that administration’s involvement at some level in 9/11. That really isn’t a far reach as subsequent events played out with them rushing the Bin Laden family out of the country after the attack.

A Final Comment by b. traven on the significance of this debate

Essentially this debate mimics the differences that exist in the Democratic left. Both sides don’t like what has happened to our country under the rule of the two parties but one side feels it is too dangerous to bell the cat and the other side wants to ring that bell loud and clear so the people hear.

The facts are there for all to see, and change will only come if those facts are brought forward directly and forcefully to the American people.

When you connect the dots starting with the neo con roadmap to “The New American Century” you realize that the Iraq invasion was merely a stepping stone to beat China and other rivals out of that oil, and also to show US determination at global domination.  Iraq, in a sense, was our “atom bomb” example.

The recent Trans Pacific Trade deal is the end game that Obama has bought into our world.  It is nothing less than a coup by multinational corporations to enslave the world’s peoples. The details of it will give corporations more power locally and nationally than even the Citizens United ruling by the Supreme Court.

That is the end game of the neo con “American Century.”  The dominance of multinationals and the end of citizens’ rights.  Welcome to a very American coup.

21 thoughts on “Welcome to a Very American Coup: A Debate on the Causes and Larger Meaning of the Iraq War”