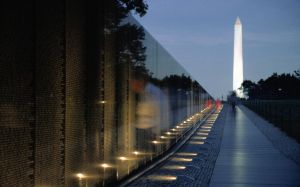 Veterans For Peace, an organization of which I’ve been a member since 2013, has called for veterans (as well as civilians) affected by the Vietnam War to write a letter to the American war dead for this Memorial Day.  This letter-writing effort is part of a campaign to counter the Pentagon’s effort to paint the Vietnam War in a “noble” light.  The letters will be hand-delivered to the Vietnam War Memorial in Washington, DC on May 25th.  This is my contribution.

To Those Whose Names Are Here Memorialized:

Some of you enlisted enthusiastically, believing you were saving “The Free World” from a communist menace; many of you, like myself, enlisted in order to “beat the draft”; but undoubtedly the majority of you were conscripted: “Take this rifle, son, or…meet your cellmates for the next few years in this Federal Penitentiary.” A few of you were women, serving in a medical or perhaps clerical setting. Death, the Great Leveler, has here united you all.

But Death is not the only thing that binds you together. You were all victims of a national sickness, a belief that the United States of America has a God-given mandate to rule the entire globe, to its own economic benefit. You were all victims of a chain of monstrous lies which led to your deployment to a strange land that most Americans didn’t know existed prior to the 1960s. The first of these was the fiction that there was a separate, sovereign nation called “The Republic of South Vietnam” that needed you to defend it against “aggression from the north.” Democrat, Republican, it mattered not: our national leaders lied to us again and again and perpetuated one of the most criminal wars of modern times. Not a single one of you should have been deployed to Vietnam in the first place. Not a single one! And thus, as surely as the uncounted millions of inhabitants of the region killed by US weaponry, each and every one of you is a victim of US military aggression. And no one in the leadership of the war machinery, at any level, has ever been prosecuted for their roles in this criminal undertaking. Not a single solitary one.

If resurrected from the realm of the dead you could be, what would you make of the state of the world today? Sure, the advances in technology would wow you at first. Such wizardry! Hey, what became of the USSR? And is that a black man in the White House?!? That would be a shocker, no doubt. But after examining what is recent history for us in this present era, I hope you would be alarmed and ultimately outraged that American troops are still deployed all over the world in the effort to maintain economic hegemony, and that they kill and occasionally get killed or maimed…for what, exactly? To “defend freedom”? While our own dwindling freedom here at home is in mortal peril of being extinguished, in the name of “our own protection”! While the streets of our cities and towns are patrolled by cops wearing full combat gear, generously donated by the Pentagon. And that very Pentagon is spending millions of taxpayer dollars on a campaign to persuade the generations following ours that the war that took your lives was far, far from the monstrous crime that it was. I hope you would be sufficiently appalled that the USA learned not a damned thing from its defeat in Vietnam that you would be moved to actively resist current government policies. But that is a struggle we, the still living, will have to pursue. Continue to rest in peace, brothers and sisters. Your fighting days are over.