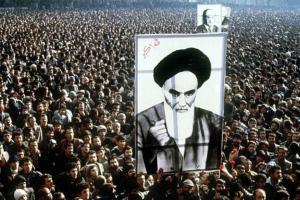 In the early 1970s, the US counted Iran as a close ally.  A big fan of warplanes and weapons, I recall the US selling the F-14 Tomcat, the plane flown by Tom Cruise in “Top Gun,” as well as HAWK surface-to-air missiles and other advanced weaponry to the Shah of Iran.  Back then, the F-14 had the most advanced avionics of any American plane, with a powerful radar linked to Phoenix air-to-air missiles.  By selling the F-14 to Iran, the US was in a sense entrusting the Iranians with some of America’s most classified military secrets.  (I later recall reading that the Iranians used F-14s as mini-AWACs planes, as in airborne warning and control, due to the power of its radar systems.)

Well, that was then, when the Shah of Iran was our ally.  Then the Iranian Revolution came, the Ayatollah Khomeini came to power, Iranians took Americans hostage in the US embassy, and Iran morphed into our “Great Satan” even as we became theirs.  (As a teenager, I wore a t-shirt with Khomeini’s profile in a sniper’s crosshairs; the t-shirt read “Put a Hola in the Ayatollah.”  It was quite popular.)

Now, of course, Iran is a nuclear bogeyman and a meddler in American designs on the Middle East.  The irony is that the USA itself has been instrumental in facilitating the rise of Iran.  This is amply documented in Peter Van Buren’s latest article for TomDispatch.com.  It seems that what ever the US attempts in the Middle East, notably the invasion and occupation of Iraq, Iran emerges as the biggest beneficiary.

Maybe we’re still allies after all, and the Iranian Revolution was just a dream, as in that old plotline on the nighttime soap opera, “Dallas”?  Heck, given the poor script being written by our foreign policy experts, anything seems possible.

Iran should send America a fruit basket to thank it for setting the stage so perfectly for its ascent. As a start, in 2003 the United States eliminated Iran’s major border threats: Iraq’s Saddam Hussein to the west and the Taliban in Afghanistan to the east. (The Taliban are back of course, but diligently focused on America’s puppet Afghan government.) The long slog of Washington’s wars in both those countries dulled even the reliably bloodthirsty American public’s taste for yet more of the same, and cooled off Bush-era plans in Tel Aviv and Washington for air strikes against Iran’s nuclear facilities. (After all, if even Vice President Dick Cheney couldn’t pull the trigger on Iran before leaving office in 2008, who in 2015 America is going to do so?)

Better yet for the Iranians, when Saddam was hanged in 2006, they not only lost an enemy who had invaded their country in 1980, launching a bitter waragainst them that didn’t end for eight years, but gained an ally in the new Iraq. As U.S. influence withered away with the failure of the March 2010 Iraqi elections to produce a broadly representative government, Iran stepped in to broker a thoroughly partisan settlement leading to a sectarian Shia government in Baghdad bent on ensuring that the country’s minority Sunni population would remain out of power forever. The Obama administration seemed nearly oblivious to Iran’s gains in Iraq in 2010 — and seems so again in 2015 …

The U.S. is running around in circles in the Middle East, patching together coalitions here, acquiring strange bedfellows there, and in location after location trying to figure out who the enemy of its enemy actually is. The result is just what you’d expect: chaos further undermining whatever’s left of the nations whose frailty birthed the jihadism America is trying to squash.

And in a classic tale of unintended consequences, just about every time Washington has committed another blunder in the Middle East, Iran has stepped in to take advantage. Consider that country the rising power in the region and credit American clumsiness for the new Iranian ascendancy.”

4 thoughts on “Iran on the Rise, Courtesy of the United States”