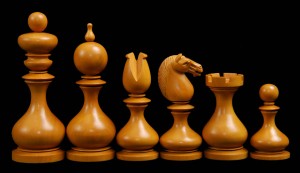 Only Putin Has the Pieces in this Chess Match

A few weeks ago I wrote that Russia, in occupying Crimea, was mainly concerned about maintaining their basing of their Black Sea Fleet in Crimea.  This after their clear understanding that the regime change in Kiev, partially financed by us, was largely part of the U.S. strategy of surrounding Russia with American assets and thus isolating Russia from the west.

I now feel that Putin had a much more comprehensive chess game in mind and it differs dramatically from the simplistic game the Obama team envisaged for their Ukrainian gambit. Putin is using his Crimean gambit as part of a larger strategy.  Instead of allowing Russia to be isolated, Putin is deploying his pieces to extend Russian influence over the chess board that is Eurasia.

In the recent Paris talks with Secretary of State John Kerry the Russians are adamantly seeking not only to reorganize the Ukrainian state into a federation but to inform the Obama Administration that other border states, such as Moldova and Transnistria, will be assimilated into the Russian nation, thereby extending a cordon against further U.S.-NATO expansion eastward.

So far, Putin has stymied the aggressive U.S.-NATO strategy to weaken Russia and turned it into an embarrassing failure of neo-conservative foreign policy.  Outmaneuvered and hemmed in, there is very little Obama can do to push back, but perhaps Putin will give him a face-saving narrative to feed the American people (Obama has saved the poor people of Ukraine from the Russian bear, right?).

In essence, Putin has responded craftily to the U.S. attempt to destabilize the Ukrainian government, using his own Crimean Gambit to checkmate the aggressive yet clumsy designs of the Obama Administration.  Lacking major pieces on the chess board, Obama has no recourse, and cannot impact, Putin’s growing regional influence.

This fact showcases not only the ineptness of the Obama Administration but its deceit in embracing the discredited neo conservative foreign policy of the imperial Bush/Cheney regime, even as Obama postures about fostering peace.

Leave a Reply to b, traven Cancel reply