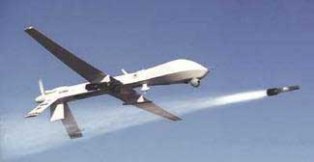 A recent article at NBC News is unusual in that it highlights the awfulness of war even when the killing is “surgical” and done by drones.  Brandon Bryant, a former drone operator for the Air Force, suffers from PTSD and feels that killing by drone caused him to lose respect for life, that he became like a sociopath.  Especially upsetting to Bryant was when his commander gave him a “diploma” (most likely an award citation) that stated he had contributed to the deaths of 1,626 people.

Drone strikes are basically extra-judicial death sentences from the sky.  For Americans, they seem unproblematic because we’re not exposed to them and because our government tells us only “militants” and evil-doers are being killed.

But the temptations of drone warfare are considerable, as I wrote in an article for Truthout in August 2012.  Here’s what I said back then:

What happens when we decouple war’s terrible nature from its intoxicating force? What happens when one side can kill with impunity in complete safety? General Robert E. Lee’s words suggest that a nation that decouples war from its terrors will likely grow too fond of it. The temptation to use deadly force will no longer be restrained by knowledge of the horrors unleashed by the same.

Many Americans seem happy that we can smite foreign “militants” at no risk to ourselves. They trust that our military (and the CIA) rarely misidentifies a terrorist, and that “collateral damage,” that mind-numbing euphemism that obscures the reality of innocent men, women, and children obliterated by missiles, is the regrettable price of keeping America safe.

But the reality is that sloppy intelligence and the fog and friction of war combine to make seemingly antiseptic drone warfare much like all other forms of war: bloody, wasteful, and terrible. Terrible, that is, for those on the receiving end of American firepower. Not terrible for us.

There is a real danger that today’s drone warfare has become the equivalent to the Dark Side of the Force as described by Yoda in The Empire Strikes Back: a quicker, easier, more seductive form of terror. It is indeed seductive to deploy the technological equivalent of Darth Vader’s throat-constricting powers at a safe distance. We may even applaud ourselves for our prowess while doing so. We tell ourselves that we are killing only the bad people, and that the few innocents caught in the crosshairs constitute an accidental but nonetheless unavoidable price of keeping America safe.

In light of America’s growing affection for drone warfare combined with a disassociation from its terrible results, I submit to you a modified version of General Lee’s sentiment:

It is not well that war grows less terrible for us – for we are growing much too fond of it.

2 thoughts on “The Temptations of Drone Warfare”