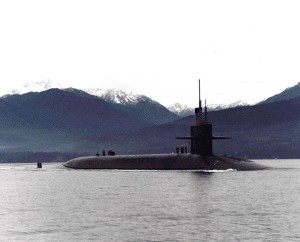 America’s nuclear triad of land-based intercontinental ballistic missiles (ICBMs), sub-launched ballistic missiles (Ohio-class nuclear submarines), and nuclear-capable bombers is a relic of the Cold War.  The triad may have made some sense in a MAD (as in mutually assured destruction) way in the 1960s and 1970s, at the height of the Cold War with the USSR.  But it makes no strategic or financial (or moral) sense today.  Nevertheless, the U.S. is investing $10 billion over the next six years to update land-based ICBMs, missiles that should be decommissioned rather than updated precisely because they are both outdated and redundant.

The most survivable leg of the nuclear triad remains the U.S. Navy’s nuclear submarines, which carry Trident II missiles with multiple warheads.  These submarines are virtually impossible for any potential American foe to locate and sink in any timely fashion, therefore ensuring a survivable nuclear deterrent that is more than sufficient in any conceivable crisis.

Indeed, it’s arguable whether the U.S. needs any nuclear deterrent, given the size of the U.S. military and the power of its conventional military forces.  Even old Cold War warriors like Henry Kissinger have come out in favor of eliminating nuclear weapons from the earth, as did Barack Obama when he first ran for president in 2008.

But morality and common sense quickly disappear when politics and fear-mongering intervene.  States where nuclear missiles are currently based, such as North Dakota and Wyoming, want to keep them in their silos so that federal dollars continue to flow into local and state economies.  Fearful “hawks” point to the existence of nuclear missiles in China or Russia (or even Pakistan!) as the reason why the U.S. needs to maintain nuclear superiority, even though no country comes close to the power and survivability of the U.S. Navy’s Trident submarines.

And let’s not, of course, forget morality.  With Christmas coming, I recall something about “Thou Shall Not Kill” and loving thy neighbor.  Spending scores of billions (maybe even a trillion dollars!) to update America’s nuclear arsenal, an arsenal that has the capacity to unleash genocide against multiple enemies while plunging the planet into nuclear winter, seems more than a little contrary to the Christian spirit, whether at Christmas or indeed any time of the year.

The decision to “invest” in outdated and redundant land-based ICBMs says much about the American moment.  It’s almost as if our government believes the nuclear triad really is the Holy Trinity.  Heck — why else did our country choose to anoint genocidal nuclear missiles as “Peacekeepers“?

It should sadden us all that some American leader of the future may yet utter the line, “We had to destroy the planet to save it.”  Such is the horrifying potential and maddening logic of our nuclear forces.

17 thoughts on “The Nuclear Triad Is Not the Holy Trinity”