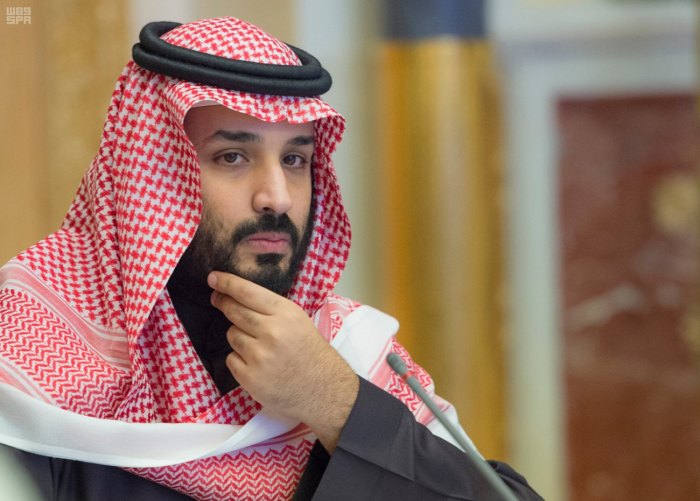 Something unprecedented is going on in the Middle East.  Not that war and chaos are anything new.  But the seemingly new-found independence of some of the actors in the region, particularly Saudi Arabia, but to some extent Israel is a disturbing development.  With the Trump administration effectively asleep at the international relations wheels, a coup in Saudi has set the stage for a new era of discord – and maybe war – in the region.

A keen observer of Israel, and others in the Middle East, in this first of three posts, Richard Silverstein shares his insights on the rise of Mohammed bin Salman, and how he has thrown a match into a potentially explosive situation in Lebanon, something very much to Israel’s delight. – Ed.

Over the past 24 hours, the drumbeat of war in the Middle East has risen to a fever-pitch. Saudi Arabia has provoked both an internal domestic, and a foreign crisis to permit Crown Prince Mohammed bin Salman to realize his grandiose vision of the Saudi state.

Internally, Salman suddenly created an anti-corruption commission and within four hours it had ordered the arrest of some of the highest level royal princes in the kingdom, including at least four sitting ministers and the son of a former king.

The most well-known name on the list, and one of the world’s richest men, was Alwaleed bin Talal.

Just a few hours earlier, after being summoned to Saudi Arabia for consultations, Lebanese Prime Minister Saad al-Hariri told a Saudi TV audience that he was quitting his job due to “death threats” against him. Why the prime minister of a country would resign in the capital of a foreign nation is inexplicable.

Coverage of Hariri’s statement noted that he spoke haltingly into the camera and looked off-camera several times, indicating that the statement may have been written for him and that he may have delivered it under duress.

Given the strong-arm tactics used by bin Salman to both secure his own title as crown prince, and the subsequent arrest of scores of prominent Saudis deemed insufficiently loyal to him, it would not be at all out of character to summon the leader of a vassal state and offer an ultimatum: either resign or we will cut you off (literally).

Middle East Eye editor David Hearst agrees: “It is difficult to avoid the conclusion that when he left Lebanon, Hariri had no intention of resigning, that he himself did not know that he would resign and that this resignation had been forced on him by the Saudis.”

Hezbollah leader Hassan Nasrallah called Hariri “our prime minister” in his own address to the nation after the “resignation”. This doesn’t sound like a man who wanted Hariri out of power. Lebanon’s president announced he would not accept Hariri’s resignation till he returned in person to affirm it.

Further, Saudi Arabia announced that Hariri would not be returning to Lebanon due to the so-called threats on his life.  Something doesn’t smell right.

After losing in Yemen and Syria, bin Salman appears willing to try yet a third time, turning Lebanon into a political football to even scores with foreign enemies. Unfortunately Hariri, like his father before him, is being squeezed to within an inch of his life. This time, by the Saudis instead of the Syrians.

The Saudi crown prince appears eager to ratchet up the conflict with Iran. Bin Salman, like his new ally, the Israeli Prime Minister Benjamin Netanyahu, appears willing to exploit and manipulate hostility to a foreign enemy in order to bolster his own domestic stature.

Given that he’s hellbent on establishing his own dominance in Saudi internal politics, such an enemy is very helpful in holding rivals at bay.

Israel has responded in kind. On Monday, the foreign ministry sent an urgent cable to all diplomats demanding that they mouth a pro-Saudi line regarding the Hariri resignation. Haaretz’ diplomatic correspondent, Barak Ravid, tweeted the contents of the cable: 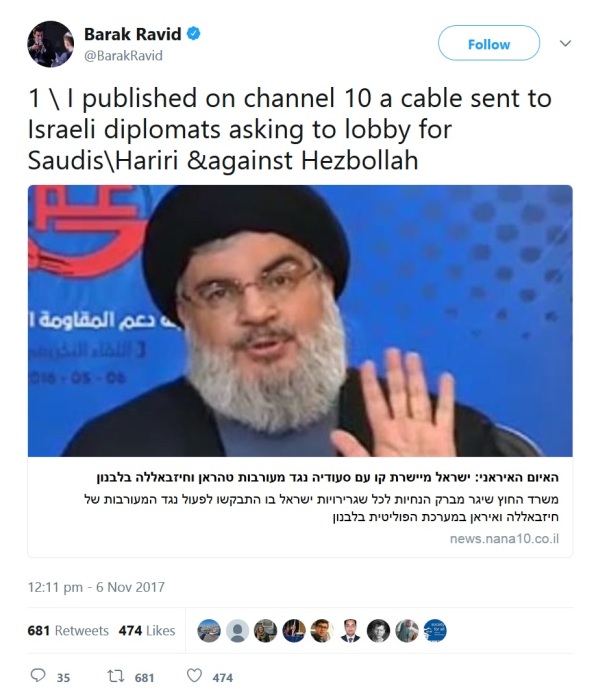 This indicates that Israel and Saudi Arabia are developing the sort of “no-daylight” relationship that Israeli leaders used to tout with their American counterparts. Together with their combined military might and oil wealth, these two countries could pose a highly combustible commodity.

This post originally appeared in Middle East Eye on 7 November 2017.

3 thoughts on “What is Saudi Arabia Up To? Part I”