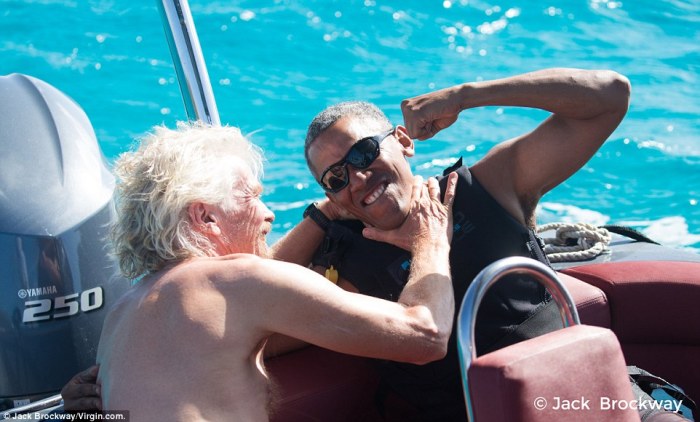 My pet peeve these days is seeing  pictures of a smiling, self-indulgent Barack Obama enjoying himself on a surf board in Hawaii in the company of billionaire Sir Richard Branson or on the deck of a ‘super yacht’ while we poor peons are suffering under his weak legacy of too little too late.

Why did this poor excuse for a president who promised us “hope and change” wait until the last days of his hopeless presidency to sign “executive orders” rather than four years earlier when they would have been embedded in the public’s consciousness and more difficult for the intruder now in the White House to rescind?

Trump has rescinded virtually every one of Obama’s last stab ‘executive orders’ and what do we see as Obama’s reaction but his smug, smiling face on a ‘super yacht’ with his billionaire friends. He didn’t earn that vacation.

How insensitive he truly is. Let us not forget he helped to build Hillary’s false assumption that she would be the next president and he saw to it that Debbie Wasserman Schultz (a Clinton acolyte) was positioned as National Chair of the Democratic National Committee to funnel funds to the Clinton campaign to the detriment of the more viable Sanders candidacy.

23 thoughts on “My Current Pet Peeve”