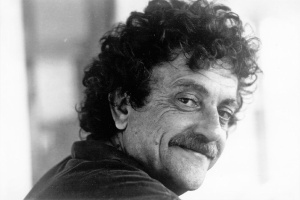 I finally had a chance to read Kurt Vonnegut’s classic book, Slaughter-House Five, based upon his experiences in World War II as a POW who survived the firebombing of Dresden in 1945.

I grew up on war stories featuring air raids by the German Luftwaffe as well as the Allied combined bombing offensive of World War II. Favorite paperbacks that I read include Cajus Bekker’s The Luftwaffe War Diaries, Adolf Galland’s The First and the Last, and Big Week by Bill Yenne (about the week in February 1944 when the Allies turned the tide of the air campaign against the Luftwaffe in the skies over Germany).  All of these books had one thing in common: they were written from the perspective of the air crews, not from the perspective of those on the receiving end of bombs and bullets and fire.  As such, they read like adventure stories, at least to my excitable teenage mind.

Kurt Vonnegut gave us a different perspective in Slaughter-House Five: at the ground level, during and after the firestorm that destroyed Dresden in February 1945, one year after the Allies had allegedly turned the tide and “won” the air battle during Big Week.  The moon scape that Vonnegut encountered after leaving his shelter was evidence of the perfect firestorm the Allies had created in their bombing raids over Dresden, which combined area bombing at night by Britain’s Royal Air Force (using a mix of high explosive and incendiary bombs) with daylight “precision” bombing by U.S. bomber forces.

But I don’t want to speak about the horrors of that raid.  No need to repeat Vonnegut’s account.  What struck me in reading his book was an imaginary air raid, an air raid that runs backwards.  In Vonnegut’s words:

American planes, full of holes and wounded men and corpses took off backwards from an airfield in England. Over France, a few German fighter planes flew at them backwards, sucked bullets and shell fragments from some of the planes and crewmen. They did the same for wrecked American bombers on the ground, and those planes flew backwards to join the formation.

The formation flew backwards over a German city that was in flames. The bombers opened their bomb bay doors, exerted a miraculous magnetism which shrunk the fires, gathered them into cylindrical steel containers, and lifted the containers into the bellies of the planes. The containers were stored neatly in racks. The Germans below had miraculous devices of their own, which were long steel tubes. They used them to suck more fragments from the crewmen and planes. But there were still a few wounded Americans, though, and some of the bombers were in bad repair. Over France, though, German fighters came up again, made everything and everybody as good as new.

When the bombers got back to their base, the steel cylinders were taken from the racks and shipped back to the United States of America, where factories were operating night and day, dismantling the cylinders, separating the dangerous contents into minerals. Touchingly, it was mainly women who did this work. The minerals were then shipped to specialists in remote areas. It was their business to put them into the ground, to hide them cleverly, so they would never hurt anybody ever again.

There you have it: the best air raid ever, brought to you via the imagination of a great writer who survived one of the worst air raids ever.

I’m not sure Vonnegut’s words would have resonated with my teenage mind, caught as it was in dramatic and deadly duels in the skies over Europe.  As Vonnegut knew, there’s an endless supply of dumb teenagers fantasizing about war.  So it goes.

4 thoughts on “The Best Air Raid Ever”