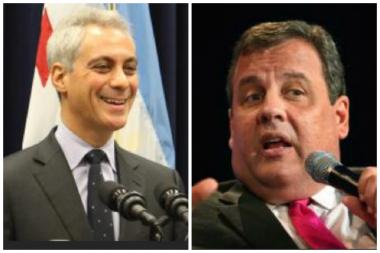 What’s up with ABC News?

I speak here of the recently departed neoliberal Democrat mayor of Chicago Rahm Emanuel and the loud-mouthed, conservative Republican ex-governor of New Jersey, Chris Christie–both of whom left office with their ratings in the tank and the stench of scandal hovering about them.

Christie, who got a lot of media attention for his nasty retorts attacking citizens who asked him uncomfortable questions, will probably be best remembered for the “Bridgegate” scandal. Several of  his closest aides took the fall for a scheme that interrupted traffic on the George Washington Bridge to punish a Democratic small-town mayor who refused to endorse Christie’s re-election.

Somehow he managed to escape punishment for the escapade, though his own assistant testified he knew of the plan and almost everyone else was convinced his patronage workers would never pull off such a bizarre stunt without his knowledge and agreement. But now they are sitting in the slammer while he sits on a panel of respectable journalists and political analysts hosted by former Bill Clinton advisor Stephanopoulos.

As a Trumpian Republican he must be “balanced “by a Dem. In tryouts they had picked the thoughtful, moderately liberal former North Dakota Senator Heidi Heitkamp, who is also ensconced at Harvard. But it seems they are about to give the permanent seat to Emanuel, also known as Mayor One Percent, who became a media favorite for his foul mouth and colorful antics while working in the Clinton and Obama administrations.

Elected mayor of Chicago twice but never truly liked, history will surely view him as central to the coverup of the police murder of the troubled black teen Laquan McDonald five years ago, when revelation of the killing might have killed his re-election campaign. Once a telltale tape was released the top cop was fired and complicit state’s attorney was defeated. The killer cop eventually got a light sentence while Emanuel realized he could not win a third term and dropped out of the race recently won by Lori Lightfoot.

So the so-called “powerhouse roundtable” portions of the hour-long show apparently will feature verbal duels between the two thuggish wiseacres who supposedly represent their respective parties. I suppose the producers expect their exchanges will add political sex appeal to an often dull show filled with partisan talking points and conventional wisdom.

Let me note, however, that there is one regular “powerhouse” panelist who is an excellent political analyst and commentator. That’s Matthew Dowd–a Republican political consultant who was a key advisor the Bush-Cheney election campaign.

Yes–I am speaking highly of a Republican. He’s a Never Trumper, not a propagandist–a smart analyst who plays it straight and nonpartisan. Dowd is always worth hearing even if you ultimately disagree with his point.

Hey ABC–we need more like him instead of “colorful” wiseacres.

One thought on “ABC’s Obnoxious Tag Team: Christie and Emanuel”