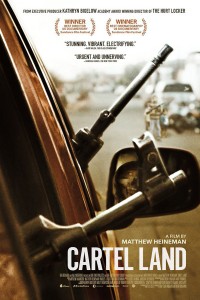 Introduction: America’s self-declared war on drugs is in its fifth decade with victory nowhere in sight.  In fact, the war has created its own violent dynamic, its own complex of deeply conflicted interests.  In the USA, that would include the DEA, Homeland Security, the FBI, and most other law enforcement agencies; the prison system, increasingly privatized and for-profit; parole officers and public defenders and drug treatment centers, among other players, and finally the devastating reality of families and individuals damaged or destroyed by drugs.  The cost, societal and financial, has been and continues to be astronomical.

Real answers are few, but one false “answer” seems to be to demonize the foreigners (the Mexican or Colombian or Afghan or whomever) while using the military and militarized police to interdict the drug trade, a strategy focusing on the supplier that has largely failed.  The system’s response is simply to say: It hasn’t failed. We just need more: more police, better technology (e.g. drones and sensors), stricter border controls, more SWAT raids – and we’ll win. But what does “win” mean?  Government agencies profit, private industry profits, prisons profit — heck, even the drug trade profits.  But American (and foreign) families continue to lose.

Dan White’s review of Cartel Land, a documentary that recognizes the complexity of the drug trade, is a salutary reminder that a war mentality is not the answer, especially when drugs is the subject.  W.J. Astore

Cartel Land: A Documentary on the Human Costs of the War on Drugs

There have been numerous Hollywood movie-cartoon-thriller-shoot-em-ups about the drug cartels (the latest being Sicario, starring Emily Blunt and featuring plenty of violent gun-play), but Cartel Land is hands down the best film ever made about them.  It shows the true ugly reality of the collapse of Mexico and Mexican society that the drug cartels have caused, and the pain and injury to so many ordinary Mexicanos who fall afoul of them, by act or sheer happenstance.  There is no good ending to this story; the cartels are well-established and the Mexican state has failed.  Even if the US were to legalize drugs tomorrow, and thereby stop the tidal wave of US dollars to the cartels in Mexico and other points south the fact is that the cartel organizations have become an integral part of Mexico, and their criminality there would continue unchecked, to the great sad detriment of all Mexicanos.  This has been out in the open for anyone to see for at least the past decade, and it is ignored here by our political class, by the intelligentsia, by foreign policy types, and by almost every American.

Cartel Land follows two groups of vigilantes fighting the Mexican drug cartels—the cartels that kill thousands of Mexicanos every year and who have taken over large parts of the country, its government, and its society.  The first group of vigilantes is the Autodefensa group in Michoacan, where the movie’s staff had the great good timing to catch this group, headed by the talented and charismatic Dr. Jose Manuel Mireles, in its formative days and the year or two immediately afterwards where the group was on its big dynamic upswing.

The second group of vigilantes is an American group, a much smaller group—less than a dozen—at the Arizona border.  It’s led by a Tim Foley, Army vet, one of those interesting characters of strong personality and great practical skills who wind up in construction because they are physical outdoors people that can’t handle the bullshit factors in suitland.  Mr. Foley got wiped out financially in the ’08 housing bust and decided to quit construction and form up his own unit to fight what he saw as the Mexican cartel invasion of his section of the Arizona border.

The two vigilante groups and leaders’ stories are crosscut, and the film is framed opening and close by another narrative, this of scenes of Mexicanos working in a countryside meth lab somewhere in rural Mexico, with narration provided by an offscreen but wise and articulate (in excellent English, no less) member of the meth lab crew.

Foley’s group grabs AR-15s, and Army surplus uniforms and web gear, and goes out on patrols, foot patrols and not drive-around bullshit, in the mountains of the Arizona border.  Hard-assed work, that.  Most Americans don’t have it in them to do that sort of physical work voluntarily; it is greatly to their credit that Foley and company do.  On the other hand, they ain’t the sharpest tools in the shed politically.  Foley et al argue that they are keeping the Mexican drug cartels out of their neck of America with their actions.  The actual net result of a year’s efforts on their part seems to have been the capture of one group of half a dozen Mexicanos who obviously were hoofing it over here for work.  Foley has little understanding of who the cartels are and how they operate, and the same is true of all his associates as well.

More understanding of how the cartels work, operate, and more importantly succeed at what they do so well is from the Mexican side.  Dr. Mireles puts together the vigilante group the Autodefensas in his small city to fight the Knights Templar drug cartel that had taken over things there.  The Knights Templar is the third iteration of the Zetas, if I remember the genealogy right, and like all the cartels have in the past decade, they have gone from purely a drug operation into a completely unchecked crime and mayhem operation doing whatever suits them courtesy of their lack of effective opposition from the Mexican state apparatus, which is thoroughly infiltrated and corrupted by the cartels to where the government is fully partners in crime with the cartels.  This is somewhat understood here in the US and universally understood in Mexico.

Dr. Mireles’ organization starts up in his small city and attracts immediate support from ordinary Mexicans who are tired of living in a lawless land whipsawed between cartel and Mexican military and governmental thuggery.  In short order, they, at least according to the movie’s narrative, run out the drug cartel from their city, and kick the Mexican Army out as well.  The Autodefensas, driven by both popular support and by Dr. Mireles’ ability and ambition, expand throughout the state of Michoacan.

As the story progresses, as the Autodefensas grow and spread, it gets seriously ugly.  The Autodefensas at work obviously and openly become an armed organization that terrorizes large numbers of their fellow Mexicans.  They begin to steal at gunpoint from drug cartel members, or persons assumed to be cartel members, and they terrorize at gunpoint suspected cartel members or associates for information or intimidation.  They become another organization cursed openly by ordinary Mexicans as another group of armed criminal predators.  Dr. Mireles is put out of action for half a year or so by a light airplane crash, and while he is out of the picture the #2 of the Autodefensas organization  sells out to the Mexican Army, which offers him legitimacy and lots of new guns and other boy toys.  Same as selling out to the cartels, that.  Dr. Mireles loses the political battle with him and his allies for control of the organization, and is forced out of the Autodefensas.

Dr. Mireles, for all his considerable talents and charisma, is revealed by events as a skirt-chasing horn dog of very long standing, and his wife, fully aware of it, starts to pull the plug on their marriage and their family—between his open infidelities and the horrible real threat of death they live under from the cartels, she is done with him and the marriage and its hypocrisies.

In the film’s final scene, the off-screen meth lab worker-narrator tells of how the Autodefensas were just like anybody else in Mexico, that the drug money bought them off, that everybody is for sale, and they are now a partner like the Army and police are to the drug cartels.  Dr. Mireles at least escapes with his life, as the Mexican government puts him in prison at the movie’s end in some sort of preventive detention.  Some sort of deal will be worked out, and he’ll flee to the States if he gets out, or will be whacked in prison.  His run is over; the cartels have won completely.

It’s a dispiriting ending to a fine documentary, one that puts the lie to the narrative that the U.S. and Mexico are winning the “drug war.”  It’s a sad state of affairs that even a political half-wit like Tim Foley is aware of the dangers of the cartels to the US, and that the war is lost, but his own efforts are completely on the wrong path and completely ineffective both, mostly due to his and America’s blindness and indifference to the troubles of our neighbor Mexico.  These are troubles to a large degree of our own causing.

Mexico as a failed state a la Libya is a real possibility and is no sort of desirable situation for this country.  We should start paying attention, and look at what we can usefully do to keep that from happening.  Between Mexican hypersensitivity to gringo interference, and American contempt and uninterest in Mexico, combined with both of our country’s leaderships’ childish infatuation with military solutions to a political/economic/social problem, there is no thinking about comprehensive solutions going on, and a dearth of ideas to address the problem.

We, both Americans and Mexicanos, need to get to work on this.  That’s what this documentary shows us.* Vigilantism and violence is not the answer.  Nor is political posturing about wall-building along the border or aerial drones or any other militarized panacea.  Cartel Lands screams at us to pay attention to the human costs of drugs and the drug war.  It offers no simple answers because there are none.

*Another thing this movie should show us if we pay attention is a complete refutation of the desirability of what the nutcase NRA 2nd Amendment types seek with universal firearms ownership and open carry. Cartel land Mexico has that now; look at it.  And anyone who takes exception to my characterization here should note before they start the usual Rush-tinged rant against me that I own two pistols, one rifle, and one shotgun, as well as air rifles to where I practice shooting regularly.

2 thoughts on “Cartel Land: A Documentary on the Human Costs of the War on Drugs”