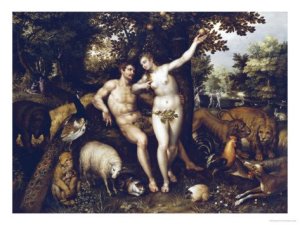 Eve tempting Adam. I guess Adam didn’t have a mind of his own

The other day my wife and I were watching Wadjda, a terrific film about a spirited Saudi girl who dreams of buying and riding her very own bicycle.  The film does a great job of highlighting the constraints put on women in traditional Saudi and Islamic culture.  Women are not allowed to drive, they must veil themselves whenever they can be seen by men, they are trained to be subservient and not to attract attention to themselves, and so on.

Watching the constraints under which Saudi women live their lives, my spirited wife uttered the following aphorism:

Religion – written by men, for men.  And that’s all you need to know.

Having been raised Catholic, it’s hard to disagree with her.  The Catholic Church has historically been misogynist.  It was Eve, after all, who tempted Adam.  She was “the weaker vessel” who was cursed with the pain of childbirth because of her “original sin.”  The Church itself, to state the obvious, is run entirely by men.  Even the woman most respected by the Church, the Virgin Mary, is an unattainable ideal.  A woman who gets pregnant without losing her virtue and virginity?  Try aspiring to that.

Whenever a religion, no matter if it’s Islam or Catholicism or some other faith or sect, places half of humanity in inferior and subservient roles, we must question very closely its true intent and inspiration.  Surely a just and compassionate God would not sanction a religion that subordinates women to the whims of men.

Obviously, I know many believers, women as well as men, will disagree with this.  They will point to their faith, their holy books, the power of tradition.  Or they will try to explain how their religion really doesn’t discriminate against women and so on.

Here I recall a saying that Temple Grandin says she will never forget: “Men will wrangle for religion, write for it, fight for it, die for it, anything but live for it.”

How true.  And I’d add that any religion worth living for is one that treats men and women equally as believers.  I don’t think God, if He or She (!) exists, would want it any other way.

7 thoughts on “On Religion”